The inaugural entry in our Pilot's Logbook will look at that polarizing beanpole, Nik Antropov. What to make of this guy? He never really had a solid place in the lineup, yet for an offensive guy we sure saddled him with a lot of shorthanded minutes. One thing was for sure: he wasn't going to get the kind of play and ice time that brought him a banner year in 2009-10 (76 GP, 24 G, 43 A, 67 PTS). So what kind of year did he have?

That's pretty much the composition of a 3rd liner who's trusted on special teams. Not exactly what you want taking up $4 million in cap space, but TNSE didn't sign the contract. So, we see the full season's TOI figures, but how did that change over the course of the year? 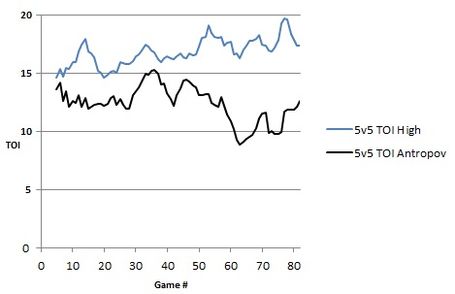 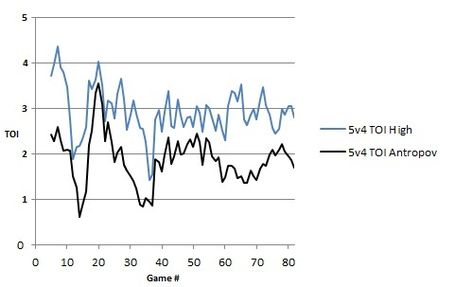 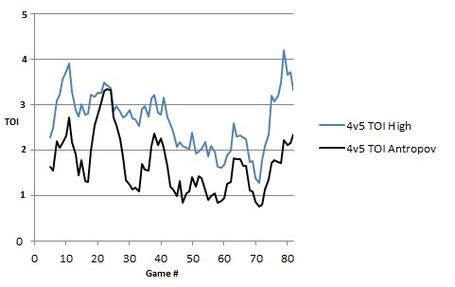 As you can see, Antropov was never a top-line player at any of the 5v5, 5v4, and 4v5 situations, but he did his time. When things got a bit heavier late in the year, we saw a dip in his 5v5 and 5v4 TOI minutes, which suggests that Noel was not entirely sold that Antro was the guy to entrust with prime offensive opportunities. Now for the last question: how did he play with these minutes? 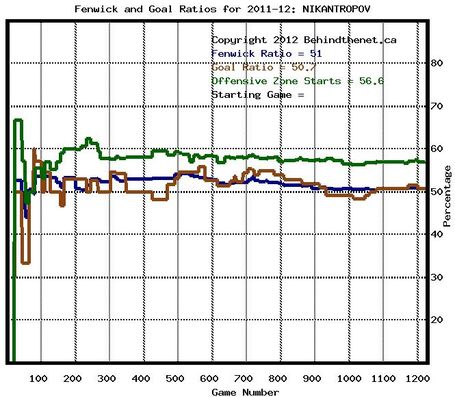 Pretty much what you'd expect from a middle-of-the-road forward, not an overtly plus player when the minutes were cushier, and gradually declining when time got a bit tougher.

Basically, he didn't wow me with anything, but his Fenwick stayed north of 50 even when he got bucked down with teammates who weren't top 6 guys.

Granted, the return that Waddell & Co. got in 2009-10 might've been worth closer to $3 to $3.5 million, but since then he's been nowhere close to that. The only thing keeping him out of F territory is that he's a little above a replacement (or minus) player.