A deeper look at zone starts.

We track Zone Starts on behindthenet.ca, and the impact they have on a player's stats seems to have registered with the media and some portion of the general public. But what to make of Zone Finishes? Here is individual season zone finish % plotted against zone start %: 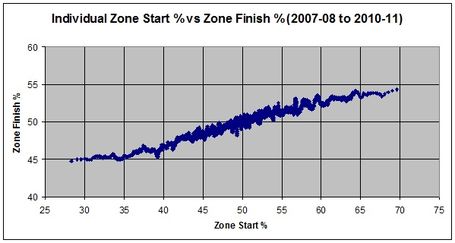 I've averaged over 25 players for each data point because the individual data just generates a large blob. The relationship doesn't appear to be exactly linear, with zone finish % flattening out at both the low end and the high end. But shouldn't it? If a player is particularly suited to going out in defensive situations and getting the puck out of the zone, then you'd expect him to get the puck out of the zone at a higher rate than those who get fewer defensive opportunities, rather than hemorrhaging chances.

Not an unexpected top 25, I believe. There are a handful of players who are being dragged around by superior teammates, but for the most part, these are talented defensive players. One weird thing you'll notice is that Crosby, Datsyuk and Zetterberg have very positive zone shift numbers despite only having a small difference in their zone start and zone finish percentages. This is a flaw in our methodology - some players end up with significantly more finishes in the end zones than starts. Clearly we need to include neutral zone starts in some way, though we'd then fail to capture players who go on the ice after their team goes offside as opposed to when the other team goes offside. I'm still making a valid point here about who has put up the best numbers in this respect, but the model needs to be tweaked.

How about the other end of the spectrum?

Is there anyone here who has a fantastic defensive reputation? I am in no way surprised that MAB finished dead last among regulars in the league. At some point I'll fine tune the methodology here, but at least we can make some use of zone finishes for the time being.