Some of you might remember that Zarley Zalapski, even though he's a 4 seed, was probably the longest shot of all of these names. I hadn't included him initially in the 1980s grouping (players are placed in the decade they began their career), and due to popular support I used my executive power to include him in the 1990s grouping. Much to my surprise, he won quite handily, and now we see him today up against a guy he might normally have wasted in the prelims. That being said, plenty of nostalgic Edmonton Oilers and New York Rangers fans will pull for Jeff Beukeboom, knowing so well how his play matched his name.

Follow after the jump to see the results of the last matchup (#3 Peanuts O'Flaherty vs. #6 Orland Kurtenbach) and get another viewing of the bracket. 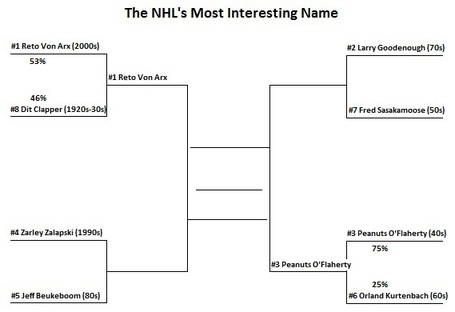 Once again, the purpose of the vote:

Make your voice be heard.