Our opening round 1v8 matchup was very close, as Reto von Arx and Dit Clapper switched the lead a number of times before the final result. Now, we come to one of my favorite to win against a name I suspect was elevated by some enthusiastic Canucks fans. Whatever the reason, it comes down to this: Peanuts O'Flaherty, Orland Kurtenbach, and a 3v6 matchup. To see the results of the von Arx vs. Clapper showdown and the overall bracket, follow after the jump. 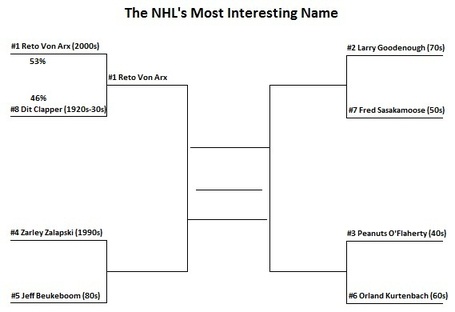 You can't stop Reto von Arx, you can only hope to contain him. Before I hand it over to vote on O'Flaherty-Kurtenbach, the purpose of the vote: