The Shifts that Changed the Game: The Curved Stick Blade

Share All sharing options for: The Shifts that Changed the Game: The Curved Stick Blade

One of the perks of NHL Gamecentre (plug! plug!!!) is that you also have the opportunity to access the "NHL Vault", which includes a number of games from nearly every season dating back to the late 1950s. Gabe sent me out on a mission to look at some things within those games, but in the process I couldn't help but observe a number of other things as well. One of the big ones: Bobby Hull, Stan Mikita, and the infamous curved blade. We talk a lot about how the expansion era changed the game, how Bobby Orr changed the game, how training's changed the game, but you could make a fair argument that - in one fell swoop - Hull and Mikita popularized an innovation that might have had just as much of an impact as anything else. Before jumping into this headfirst, you really have to see the curve on this thing... 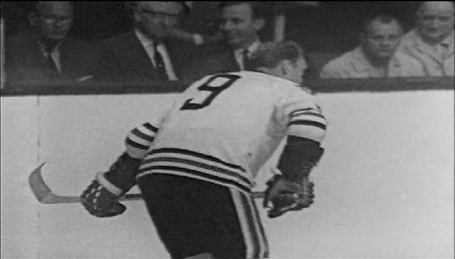 via NHL Vault at gamecenter.nhl.com

Holy crap. And it's not really just the curve, it's also the length of the blade (I'm just going to go ahead and beat you to it..."that's what she said"). It became such a phenomenon that TIME magazine ran an article on it in 1969 (called "Day of the Banana Stick"); the article reveals that it was Stan Mikita, not Hull, who initially came up with the idea. A different post suggests that 1910s and 20s legend Cy Denneny first experimented with the curve, and that Andy Bathgate would closely precede Mikita and Hull's use of the curve. Regardless, it would be Mikita and Hull that would bring the innovation to popularity, and watching games before and after the curve reveal a number of changes to the game in general.

The pre-curved era was distinct because the flat blades made a number of contemporary commonalities difficult. For instance, the snap shot as we know it was drastically different. In the pre-curved era, the snap shot was almost exclusively a half-slapshot, with the stick coming back to about knee height before coming forward to strike the puck. Today, this approach constitutes one kind of snap shot, though a more popular version involves a drag-and-snap that can fake to a dribble more easily and can mask the player's shot direction. The difference in power of the two types of shot might have been negligible in the wood-stick era, but with the flex of contemporary sticks the drag-and-snap nearly maximizes the power potential of the flex. The drag-and-snap would have been considerably harder with the flat blade because the curvature keeps the shooter from spraying wide, thus their shots frequently came from closer to the heel of the blade and without the type of shot that would fly off the open end.

The curve is sometimes attributed to influencing goaltenders to switch to masks; that might be a little bit of a stretch, as Jacques Plante started wearing his mask (as had Terry Sawchuk, Gerry Cheevers) well before the curve became commonplace, and sticks themselves were just as dangerous as pucks, but that doesn't negate a different general shift. The curve helps to "grab" the puck during a wrist or snap shot, and thus gives it easier lift as the player's follow-through raises off the ice. This makes it far easier, sometimes without even trying, to get a shot off the ice. Top-shelf, saucer pass, off the glass...these are all synonymous with the game today, but they were not nearly as prevalent pre-curve. An overwhelming majority of the pre-curve games were played from the knees down, and a great number of the higher shots were from the backhand. So I guess you could say that while I'm skeptical that the curve was the spark for the shift to goaltender masks, it certainly (caps shades) helped thaw the ice.

"He's got that puck on a string!" Well, it's not so much a string, but if you think about it you'll realize that puck control becomes quite a bit easier with the curve. The curve on the blade reduces the potential directions the puck can leave the stick, most importantly the ones from which it would be hard to retrieve. A puck in the skates or a puck pushed forward five feet in front of you is far easier to regain control of than a puck that slips off the end of the blade. But this doesn't just help your average stickhandler; a player who's already slick with the puck gains additional control. Watching Mikita with the puck, it's shocking how much his puck control stands out from the other players on the ice. The curve's arrival would also be timely for a young defenceman named Bobby Orr, who would use it to entirely change the way we think about blueliners.

The curved stick also imperiled a previously popular shot, the backhand, though the concern over the loss of the backhand masked the fact that it evolved to an equally effective place in the player arsenal. In the pre-curve games, it was common to see a player give the backhand the ol' heave-ho from the faceoff dot, though it never seemed to be a particularly dangerous shot (it rarely rebounded because of its height). This version of the backhand is pretty infrequent today, but where we do see the backhand is as a sort of "surprise shot." This includes counter-striking to steer a puck between player legs, or the lifting shot on the back-end of a deke. The backhand shot was never going away (as with soccer, an effective player needs to be able to strike from both sides), but the curve brought a different sense of purpose to the backhand and (perhaps) made it into a higher percentage shot.

This brief look at the effect of curved blades invites a number of other hypotheses. When exactly did we start to see a majority of players using curves? Could it have been another contributing factor to the high scoring of the mid- to late-1970s and into the 1980s? I'll look into these (and other aspects of the older game) in the coming weeks and possibly months.