Does it take different amounts of time to assess a player's talent?

Share All sharing options for: Does it take different amounts of time to assess a player's talent?

Phil Birnbaum was pretty amazed by my piece about Dustin Brown's penalty-drawing performance and how much it has been worth to the LA Kings. Noted sports analyst and regressor-to-the-mean Mitchel Lichtman showed up to temper Phil's excitement:

"There is not $33 mil of hidden value. The hidden value is in the true talent component of his extra penalties against.

First we have to determine the luck/skill proportion of those numbers, if there is any. Then we have to regress this guy's numbers. The regressed amount, certainly a lot less than the 380 penalties drawn, over and above league average, is the "hidden value" amount."

Phil wonders if, in fact, there is no luck in Brown's performance, and if, over the course of 6+ seasons, what we've seen is entirely Brown's true talent. While I would normally temper any conclusion based on observation with the need for more data, I think Phil's on the right track here, but potentially for another reason.

It's a bit painful for me to put together the analysis required to figure out the role of luck in penalty drawing, but what I did here was pull out all of the centers, post-lockout, who had more than 500 even-strength shots, took more then 500 faceoffs and were involved in 300 or more hits. I then went through and sampled each player's shooting %, faceoff % and ratio of hits made to total hits with different-sized buckets and calculated the regression to the mean between half the events and the other half for each player. (This is basically an even-odd analysis.) As you can see from the chart below, it doesn't take much observation to know whether a player dishes out hits or takes them; it takes 10 times as long to get to the same point on faceoffs, and more than 20 times as long to observe shooting percentage: 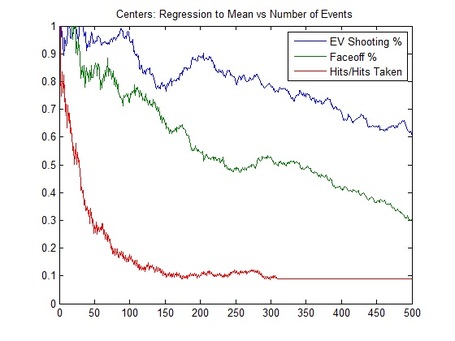 That shouldn't be surprising - how long does it take you to figure out that Kyle Wellwood isn't likely to take a run at someone? Two games, max? It might take half a season for a player's faceoff talent to become obvious, and as Henrik Sedin's 2009-10 showed, shooting talent can take several years to converge to a player's true talent.

Penalty-drawing is definitely more in the class of hitting vs getting hit than it is in the heavily luck-driven realm of making your shots. You draw penalties because you've got exceptional puck-moving skills and you create opportunities for your team that require the other team to pull you down - or because, like Brown, you're also a physical player. There's a reasonable fear after just a year or two that Brown's apparent talent depends on compliant or friendly referees, but after seven seasons, it seems unlikely that a crash in penalty-drawing will be caused by anything other than a drop in his true talent.