Alain Vigneault going for a record with Manny Malhotra

Share All sharing options for: Alain Vigneault going for a record with Manny Malhotra

Alain Vigneault abhors Manny Malhotra in the offensive zone. But he's been taking it to new heights this season - as you can see from the chart, Vigneault has been steadily reducing Malhotra's offensive zone starts. Since the 10th game of the season, Malhotra has actually been below 10%. Manny was used for ridiculously low numbers of O-zone draws last season already, but at least he was at 23% for the season. 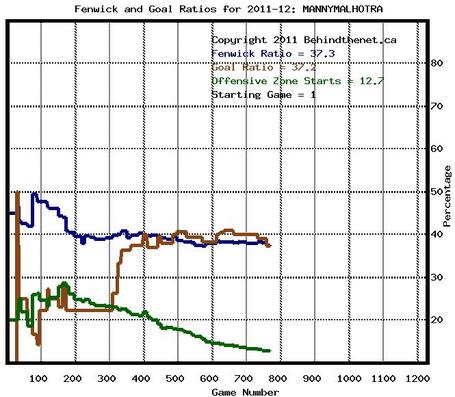 The Canucks actually broke my charts. When I put them together, it never occurred to me that any player could drop below 10% or get above 90% in any category over the course of a season, or even over a significant part of the season. How wrong I was.