BW Chart for Jets vs Canadiens 2/5

Share All sharing options for: BW Chart for Jets vs Canadiens 2/5

Another game, another crushing shooting performance. The shutout at the hands of Carey Price and the Canadiens comes at a time when we still hoped to get into the fight for the Eastern Conference playoffs. Obviously, we are not completely out of it, but being 7 points back is an unappealing hole to climb out of. I'm secretly hoping luck flips its switch and the pucks start going in or something, because otherwise we hardly have a chance in hell of squeaking in.

Back to the Montreal game; I thought we sucked. It was a deflating game for a lot of reasons, the most prominent for me being that we finally had powerplays to work with and we couldn't get anything (to make matters worse, we gave up a shortie). About the time I was going to chalk the entire thing up to another lame-duck effort... 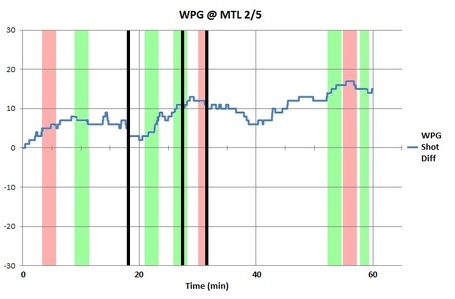