One of the perks of the BW Charts is that they give us a good idea of the shifting scenarios and ebbs-and-flows of a game. One of the disadvantages is I actually have to put them together. Thankfully, Gabe has some rough versions of them available at behindthenet.ca for the Jets here (look below the Goal/Shot Ratio and PDO charts for individual games). In these charts, you'll see total Fenwick over the course of the game, rather than the differential.

Typically, I show these one-by-one, so I thought it might be nice to have a look at a few of them together to see game-to-game variance. 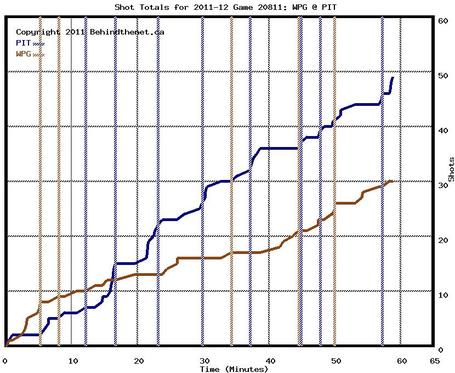 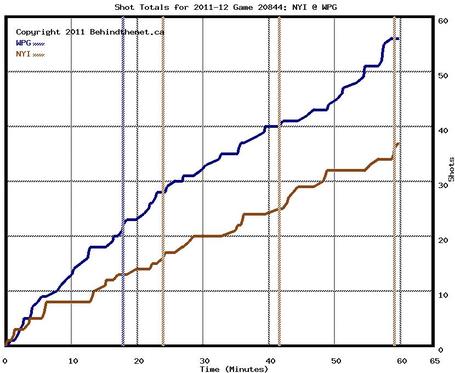 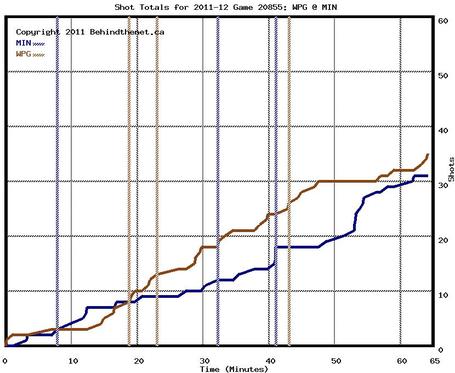 The Penguins game is a classic case of running up against a superior team; people can marvel at the advanced stats of the Detroit Red Wings, or the Vancouver Canucks and their zone starts, but for me the Penguins have truly been the most remarkable team of the season. Our game against the Islanders was impressive (end result aside), and I'm a little concerned at going back-and-forth with the Wild (though they have had a couple of injured players return), but overall I still see the Jets as a fairly good, middle-of-the-pack team. I'd also like to point out that, at least in these games, I don't see any alarming indicator that we fade in games, nor have the previous BWs suggested it. All in all, we still look like a fringe playoff team, and given a bit better luck in the shooting department over the final couple of months (home games help) we should be able to surge into springtime hockey.