Share All sharing options for: Ray Whitney: The Most Unlikely 1,000 Point Career?

Most of us know the story now - Edmonton Oilers stick boy dreams big, stays small, forges an incredible WHL career (even better than then and future teammate Pat Faloon's!), and breaks into the San Jose Sharks roster at the tender age of 19. After slogging through some horrific teams in San Jose (and after a brief stop with the Edmonton Oilers), he emerges as a legit NHL forward with the Florida Panthers, doing yeoman's work on some marginal teams on his way to where he is now, 23 points away from 1,000. A stats-inclined person should know better than to be so interested in milestones, but things like 1,000 points and 500 goals seem to have the shared respect of many - we know it is difficult to play, and play well enough, to reach those milestones.

We tend to notice the meteors, the players who get to 1,000 in 9 to 12 seasons - certainly I do, because I was quite surprised to look at Whitney's career numbers and realize that he could potentially get to 1,000. Part of my confusion was the result of the way that a lot of fans will look at his numbers:

The players in the category of having neither 50-goal, 60-assist, nor 100-point seasons, yet still accomplishing a 1,000-point career, are few and far between. I think they depict an interesting split - Hall of Famers from an era of average scoring but shorter seasons, and non-Hall of Famers considerably aided by the high-scoring 1980s. Whitney, on the other hand, comes from an era of low scoring in the NHL; does that make him a Hall of Famer? I don't know. But I do know that we can look deeper into Ray Whitney's career to see just how likely his career has been.

It's an interesting word to use, "likely," because it calls into question not just talent (though I've no doubt Ray Whitney has a lot of talent, few NHLers make it to 1,000 games without it), but also environment - season length, level of scoring in the era, and also the offensive ability of a person's team. At the base level, I wanted to look at where all these things converge, and determine at what amount of games played can we expect a player to reach 1,000 points. Using the historical player population: 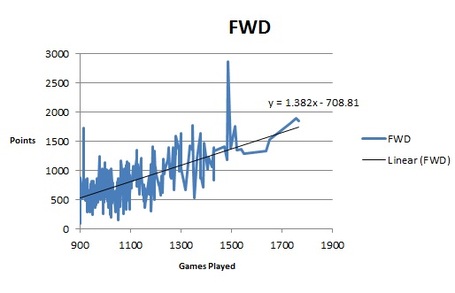 As you can see, I did two things: 1) I kept forwards separate from defencemen, for obvious reasons, and 2) I'm only looking at players that have played 900 games or more. I take plenty of risk by slicing it like this, but I feel you take just as much risk by assuming players who played less than 900 games would've made it. By this line, you can expect that a forward playing approximately 1,236 games would accomplish 1,000 points. So in that regard, Whitney's pretty much right in line with averages, assuming average era and average teammates relative to this player population.

An aside...with the above established, we can also see the guys who dragged their numbers kicking and screaming above 1,000. Using the equation to establish an expected points total, I looked at the players who underperformed it:

Per our equation, Brind'Amour was 100% likely by that point in his career to hit 1,000, but to his credit he far eclipsed it. Verbeek and Hunter, on the other hand...

The remainder of this exercise I'll be working with a forward population hanging between 800 and 1,200 career points; forwards above or below that were very, very likely to deserve their place relative to the milestone (calling back to the whole "likely" versus "unlikely" thing). Taking this group (about 50 or so players), I looked at a number of things: 1) Team goals-per-game over the player's career, 2) Player's Percentage of Team Goals-scored, 3) Player's Percentage of Team Points-scored, 4) "League Factor" (controlling for points-per-game relative to average over league history from 1942-43 to the present), wherein above 1 means era of lower scoring, and below era of higher scoring, 5) "Team Factor" (controlling for team points-per-game relative to league average over the player's career), wherein above 1 means teams with lower scoring, and below teams with higher scoring. The latter two I'm using as multipliers to determine the last metric 6) Actual minus Adjusted Points, where those multipliers give me an adjusted point total and I subtract that from their actual. A positive value suggests they were aided by their team and/or league, and minus vice versa. So, among this group of forwards, where does Ray Whitney rank?

Keep in mind that the first column, along with the last three, allude to how difficult it might be to score points given the era and team (lower rank = more difficult). The last column suggests by how many points a player might have been aided or hurt by their situation. I included the %G and %P columns to be determine just how much a player might be riding coattails; Whitney's %P of 11.3 put him ahead of Sergei Fedorov, Doug Weight, and Darryl Sittler. Looking at the far right column, this is where intuition needs to kick in - surely, Mike Bossy was a driver, not a follower, on those Islander teams; in a lesser sense, maybe you could make the same case for Bill Barber and Rick Middleton. Jarome Iginla's recent 500-goal milestone looks even greater, as do the careers of Paul Kariya and Keith Tkachuk.

For the advanced stats crowd, Whitney's recent resume has also been pretty impressive:

Basically, that's the makeup of a quality top-liner, not overly-protected, who's been a capable complement to guys like Eric Staal or Pavel Bure and a quality driver of offence with Martin Hanzal and Radim Vrbata on the Phoenix Coyotes. He's no penalty killer, but his sustained contributions at evens (and his time on the powerplay) suggest that he is a consummate professional forward. That the guy's 39 (turning 40 in May) and has been playing in the NHL for over 19 years doesn't seem to be affecting him too much.

In sum, I think it's safe to say that Ray Whitney has built an impressive career for himself, despite a number of major hurdles that might've defeated a lesser player. I'd propose that those hurdles (not Whitney's talent, mind you) will make him the most, if not among the most, unlikely 1,000-point scorers in NHL history. That he doesn't get near the attention for it is a shame, as he seems like a nice guy (at least, Googling "Ray Whitney is a dick" doesn't turn anything up), and he's never been one to rope down a gaudy contract. Chalk up one for the little guy.