Thursday night, we ran an article on AIH whichleaked photo's from Alexander Burmistrov's Instagram, in which the Russian forward expressed a desire to return to the KHL. In case you missed it, here were the photo's in question: 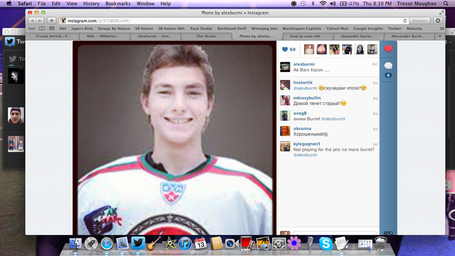 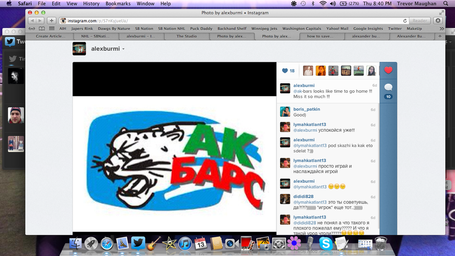 The second photo contained a blurb attached which was enough to raise some eyebrows:

While it was far from a slam dunk, there was at least reason to believe Burmistrov might look at joining the KHL's Ak Bars Kazan if the entire 2012-13 season was scrapped.

Our very own Derek Gagnon reached out to Burmistrov's agent -- Mark Gandler -- late Thursday night for confirmation on the KHL-themed photos:

I know you have been asked these questions about Alexander Burmistrov before, but recent posts on your client's Instagram account suggest a possible return to his former club AK Bars Kazan. Is there any truth to this, or is your client simply reminiscing? The major media outlets do not seem to be buzzing about this, so I doubt there's anything there, but I was hoping you could provide some clarity to the situation.

Thanks for your time,

Derek went on to provide Gandler a link to Burmistrov's Instagram profile and by Saturday afternoon, the two photos had been removed from the profile.

It doesn't take a complete conspiracy theorist to put together the pieces of this puzzle: Agent is alerted of photos. Agent contacts player. Player removes photos.

This at the very least lends credence to the notion that Burmistrov would much rather be in Ak Bars than St. John's. And we can now say with near certainty that the images were not the fabrications Gandler led us to originally believe.

Now we will wait for the second shoe to drop in these NHL CBA negotiations before turning our watchful eyes to Burmistrov's next move.

Alexander Burmistrov expresses desire to play in KHL on Instagram, then deletes posts