BW Chart for Jets vs Hurricanes 1/23

Share All sharing options for: BW Chart for Jets vs Hurricanes 1/23

The recent success of the Jets in BWs has brought me to alter the charts a bit; frankly, I'm tired of having to recalibrate every time they dominate a team in Fenwick. As you'll see below, the y-axis now spans from -30 to +30, rather than the previous -20 to +20. Ultimately, I think this will create a bit more of a desirable effect - it's not a big deal for a team to move ahead 5 in Fenwick, but 10 begins to really mean something, and so this new chart will call less attention to minor changes.

Keep in mind when viewing this one that it was, for the most part, a one-goal game, and in such cases it's probably only until the late 3rd that you'd have score effects on such a meager lead. 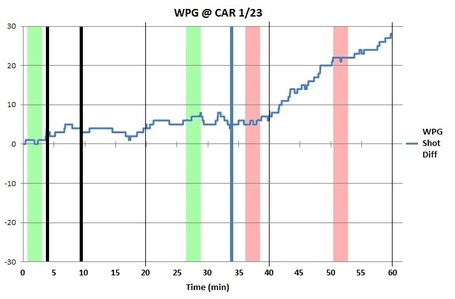