Share All sharing options for: A Deeper Look Into In-Game Expected Points

Today I want to explain the theory behind the EP data I've been posting recently, and its implications. You may be familiar with the concept of expected points. It has been featured on fangraphs (as Win Probability) for years now, and recently Brain Burke over at AdvancedNFLStats has done some incredible work, mostly with win probability and expected points. Lets get into NHL expected points

I define NHL Expected Points (EP) as the average amount of points (ie. standings points) a league average team would accumulate given the state of a particular game. A game state is made up of a number of variables. The model I created uses time, goal differential, home/away, and strength (eg. 5v5 or 5v4) into account. I choose these variables because they have the biggest effect on expected points. Thus as the game state changes because of goals, time, strength etc. the expected (or average) points changes. Let's take a look at the data in graph form. 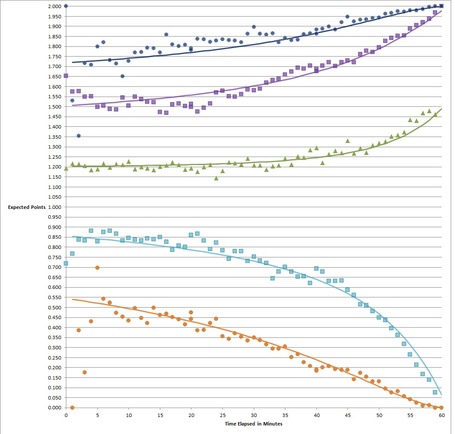 In the graph above I have plotted 3 game states. The marker's represent home expected points (y-axis) generated by real in game data. This is plotted over time (x-axis). The various colors represent goal diff. (navy is +2, purple +1, green 0, light blue -1, orange -2). Lines are the smoothed trend line.

So many interesting things can be extracted from this data. Let's start with how time effects expected points. Looking at the trend line for a game where the home team is down 1 goal (light blue); Expected points decrease uniformly until about the mid way in the 3rd period where it takes a dive dropping 0.441 expected points in 10 minutes of game time. This is the fastest decline in EP for a given time. Contrast this with the home team up by a goal (purple) which rises only 0.196 expected points in the same time.

This may seem counter-intuitive, but its clear that a team down by a goal drops more expected (standing) points than the team up by a goal gains. This is all due to the OT and the SO, which have damn near randomized the extra point for evenly matched teams. In essence a team up a goal only has 0.5 EP to lose if they give up a goal, while the trailing team has 1.5 EP to gain by scoring the goal. This has obvious coaching and strategy consequences.

As I began applying this data to games I realized it linked many elements within the game. For example scoring a goal in the first period nets you about 0.3 EP, where as holding onto a 1 goal lead for the entire 3rd period is worth about 0.3 EP. That is to say, scoring a goal in the first is worth exactly the same value as preventing your opponent from scoring for the entire 3rd. Perhaps the reason many coaches emphasize a 1-3-1 trap later in games to lock down the lead.

The value of going on the PP can be similarly compared. Let's again take a look using graphical data 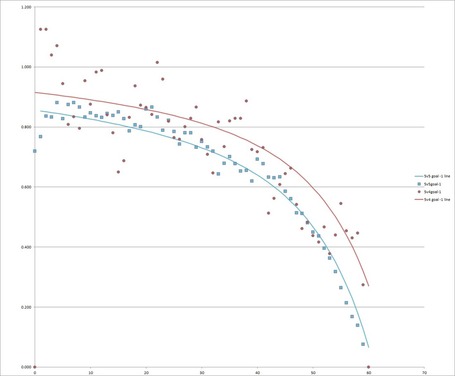 The graph above is essentially the same as the previous. This time we are looking at EP for 5v5 with a goal diff of -1 for the home team vs. 5v4. Unfortunately there just isn't sufficient real in game data . For the smoothed trend line I took a look at success rate on the PP for each minute within the game and found no real discrepancy between time. I decided to adjust for PP by the increase in probability of scoring in a given game state.

Again we can compare the value of penalties to other game entities, lets take goals. Drawing a penalty late in the 3rd is the equivalent of about 0.2 EP which represents about 67% of a goal scored in the first.

Now, let's look at a specific game to see how we can use this data to analyze a game. 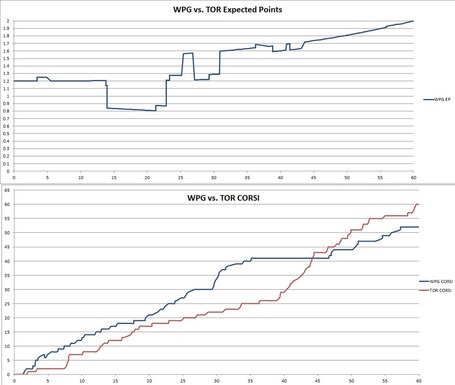 The graph above represents WPG EP for their game a day ago against Toronto. The EP is based on a league average team playing another league average team. Movement in the y-axis are changes in EP as the game state changes. I'll break down some of the key elements of the graphs

I included the CORSI graph below for comparison. WPG is greatly outshot in the 3rd, yet their EP continues to rise as they hold onto the lead. in fact holding the lead in the 3rd nets WPG about 0.4 EP which is a greater EP gain than any goal scored by WPG during the 2nd.

Lastly I'll list the Expected Points Added (EPA). This stat is the EP +/- while a skater is on the ice. Keep in mind that the home team starts at a EP of 1.2, so essentially as a team WPG can not gain more than about 0.8 EP. Players however can exceed 0.8.

I also included a stat called Success Ratio (SR), which I borrowed from Brian Burke. It codes any shift with a positve EP with a 1, and a shift with a negative EP as 0. Thus we can set the percent of shifts with a positive EPA. Lastly, I included all other +/- stats from timeonice.com for comparison.