Share All sharing options for: IceCaps barely above water in St. John's 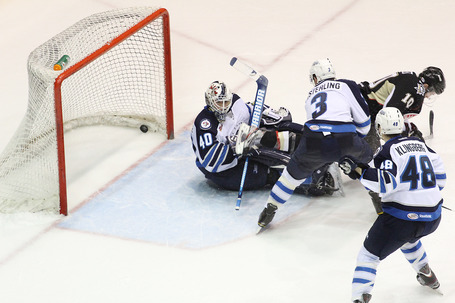 If you take a look at the standings in the AHL right now, you might be surprised to notice that the St. John's IceCaps are still among the league's better clubs and are currently holding down the Atlantic Division lead midway through the season. It's something we weren't prepared for here on the Rock, since the team came together so quickly and it was hard to gauge future success on half of a Chicago Wolves lineup from last season.

The IceCaps have been a pleasant surprise, and no doubt they've earned the praise they get in this city. But recently they've struggled to put it on display for their fans, and if you take a closer look, things almost seem backwards.

You may or may not have heard that the IceCaps have been great on the road. That's putting it lightly. This team didn't lose a game in regulation until 2012, a 3-1 loss to the Marlies on New Year's Day. Since then they've returned for a lengthy home stand, and despite two enormous wins against Division contender Manchester, have gone on to drop 3 of last four games against Toronto and WBS, respectively.


Right now there isn't much to worry about in the grand scheme, the IceCaps still hold down the Atlantic by five points over Worcester (the Monarchs have now slipped a little). But looking at their home vs. road records, it's pretty bizarre.

The IceCaps are barely afloat on home ice, with a 10-9-3 record at Mile One Centre. For a team with the second best win percentage in the Conference, you would expect better. On the road they're lights out, sporting a ridiculous 12-1-3, baffling.

If we look deeper things become a little clearer (or maybe murkier, I'm not sure). The Caps have allowed 80 goals on home ice, giving them a -5 goal differential, and an average of 3.6 goals allowed per game over 22 played. On the road they've been stingy, giving up only 2.25 goals on average over 16 games played and boasting a +22 goal differential.

It would be great if we could chalk this up to tougher competition on home ice, but it simply isn't the case (the schedule is pretty balanced.) The Marlies, for example, are one of the league's weaker road teams, and they've owned the Caps in St. John's.

For a team that has recently reached a major attendance milestone, you would expect some better performances on home ice.

I'd expect things to even out a little one way or another in the next little while. Obviously this amazing road record can't be sustained, and I doubt the team is actually as bad on home ice as they've showed recently. However, if things don't begin to improve here in St. John's, we could start to see a slip.

The club now heads on the road for it's next six games, two weeks away from Mile One Centre. Right now I'm unsure as to whether that's a good or bad thing.

You can also follow my IceCaps blog, the Ice Flow, for some game day previews and other AHL news.