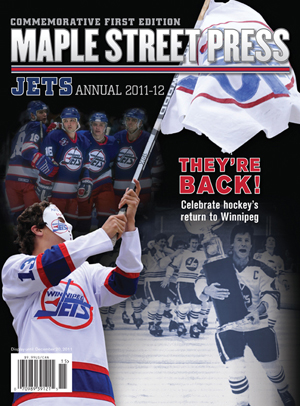 One of the perks of editing the Maple Street Press Winnipeg Jets Annual for 2011-12 is that I get a few free copies to distribute to my folks.  My parents, my brother, my sisters all got a kick out of the opportunity to see my name in print, but the person whom I knew would enjoy this the most was my grandpa.  You see, he's been a big fan of the blog, and in fact has occasionally contributed in the past.  Having both been able to see/read the finished product, we decided to team up to give you a review of some of the interesting features and articles.

Ben:  It's always a great honour to work with Gabe on anything, so when I heard he was willing to help with the statistics for the annual I was very excited.  His work did wonders for visualizing and fleshing out player performance reviews and profiles for 2011-12.

Ben's Grandpa: Gabe has been systematically undermining the hockey world for years now, and it's highly disturbing to me to see he's trying to mainstream this shit.  I'm sorry, but in your number-ridden diagrams and excessive nitpicking I see no evidence that you actually turn on your mother's TV to watch the game.

ANALYSIS OF THE JETS TWO-WAY FORWARDS BY RYAN POPILCHAK!!!

B: I've appreciated Ryan's work over at Hockey Prospectus for quite awhile, so it was great to hear that he would be willing to look at tough-minutes and two-way forwards.  It was very interesting to see our forwards matched up to some of the other two-way forwards in the league.

BG: I cut off one stathead and two grow in its place.  I appreciate Ryan's ideas on players who are tough, because I think it's incredibly important to consider in my sound, completely-subjective analysis of "heart," but when he uses numbers I have to take a nap.

INSIDE INFORMATION ON THE JETS' PROSPECTS BY KYLE KOSIOR AND EZRA GINSBURG!!!

B: Another perk to this gig was getting a chance to work with the guys over at Illegal Curve.  Kosior and Ginsburg are the guys who do the prospect work over there, and it was really enlightening to hear about a number of guys whom I hadn't the chance to see yet.

BG: Young kids don't know how easy they have it these days.  When I was coming up through the leagues, the scouts headed up to Canada for the winter and didn't come back to the U.S. till they had signed a dozen kids under the age of seven.  When I was six, I got a $5 signing bonus from New York Americans after two games and 54 penalty minutes - they sweetened the deal by buying my dad a radio and giving me some unwrapped candy.  In those days, you were either a fighter or fast enough to get away from the fighters.  Unlike today, nobody ever got a concussion, probably because nobody was that weak.

AN EXTENSIVE LOOK AT THE JETS' CAP SITUATION BY RICHARD POLLOCK!!!

B: The salary cap era has completely changed the nature of hockey analysis, as no team can afford to ignore a player's value on the ice and in the checkbook.  Fans of the Jets will be relieved to know that the Jets operate comfortably under the cap, but nevertheless we should be aware of what a few changes could do to change that.  Rich, the editor at Illegal Curve, does an excellent job of picking apart the Jets' roster and its potential issues.

BG: The salary cap era has completely changed the nature of hockey, by taking a big, wet, steaming dump on my love for the game.  It's all about money now.  Back in my day, a man could love the game and get screwed by his team quietly.  Now everybody's all "aware about their team's earnings," and "calculating their contribution to the team," and "making a decent approximation of their worth."

YEAR-BY-YEAR JETS' HISTORY AND STATISTICS BY ME!!!

B: This article was my baby, and something I'm pretty proud of.  Unlike a lot of the other MSP annuals, the Jets had a unique situation leading into the season and I decided it was a good opportunity to include some Jets history for the younger fans.  So, from 1972-73 to 1995-96, I provided a review and player statistics table of each of the seasons, and included a few new metrics as well.  For instance "TSOG%" shows what percentage of the season's shots were taken by the player, and GSC% looks at the percentage of the team's shots were taken by that player only in the games the player actually played.  I also adjusted +/- figures to the team's average +/-, and included information on even-strength scoring back to the early 1980s.

BG: Believe me, I'm no fan of the WHA.  Their clown jerseys and wide-open, exciting brand of hockey made me diarrheal (well, I guess there are a lot of things that do that, but still...).  To make matters worse, the Jets invited Europeans over constantly, forcing me to watch a new, creative form of the game.  I know, I know, it sounds bad, but you guys didn't even have to go through it.  I had to start watching rugby just to get the bitter taste out of my mouth.

BG: The pictures.  And the Rick Rypien memorial.

So if you're looking to get a head-start on the upcoming Jets season, and have a copy of the most complete Winnipeg Jets preview out there, go and order it online (once again, the link here) or catch it in Winnipeg newsstands and select bookstores starting next week.  Oh yeah, there'll be pretty pictures, too.