The NHL's Most Interesting Name: 1940s Part I

Share All sharing options for: The NHL's Most Interesting Name: 1940s Part I 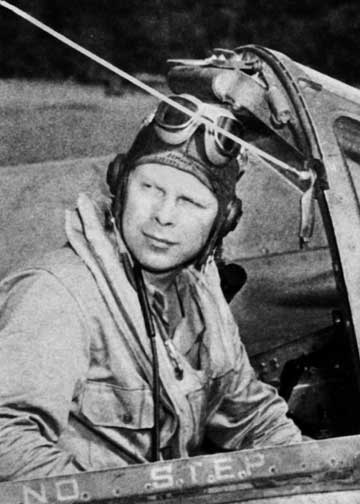 This is Dick Bong. Don't laugh, he's a god in Wisconsin and he will eat your children. (via upload.wikimedia.org)

After a knock-down, drag-out fight, it looks like Dit Clapper is going to be the winner for the 1920s/30s wing of our NHL's Most Interesting Name Finals Bracket. The Punch Broadbent challengers, unfortunately, were no match for a man who preferred to almost sound like a slang term for the human anatomy.

But for as fun as it is to speculate why a person would prefer the name Obs Heximer or Fido Purpur, it's time to move on to the 1940s. Lest you be concerned that the 40s will be lacking compared to the wonders of the Jazz Age and Great Depression naming conventions, I'll remind you that the United States' top World War II ace was Dick Bong, the Pittsburgh Steelers had a fullback named Dick Riffle, and the St. Louis Cardinals had a middle infielder called Creepy Crespi. You'll also notice that this is just "Part I"; thankfully, the 40s comprise only two parts, but nevertheless there were too many to put into one post and vote.

To clarify the goal of the tournament and voting:

The first group of contestants...