We have a lot of information about where shots are taken on the ice, but we have precious little data about where shots end up on goal (as we saw last year, the Finnish SM-Liiga has location information for goals, but not for saves.) What we do have for the NHL is shot target location: the one- to five-holes. This data can be a little suspect for single games, but in the aggregate over 5000 games, we see identifiable patterns.

Let's do a little visualization. This chart shows the number of shots on each of the five targets vs the shooter's x-y position on the ice. As you can see, most shots are low - 3-, 4- and 5-holes. There are more left-handed shooters in the league, so there's a preference for putting the puck on the left side of the net (the goalie's right). 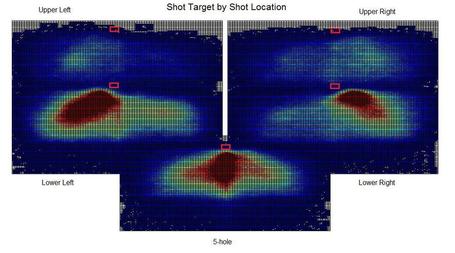 It looks like shooters on the right wing are actually more likely to get the puck up in the top right-hand corner - we'll have to look at that in more detail at some point. The next chart shows shooting percentage by target and shooter location: 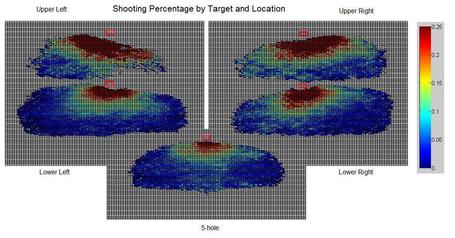 Here we see, again unsurprisingly, that shooting percentage is higher from a given spot on the ice if players get the puck up; the puck only goes in the five-hole from right in front of the net. There are some asymmetries in shooting percentage pattern on the left and right wings - again something worth exploring at a later date.