Further to: Does QualComp matter?

Share All sharing options for: Further to: Does QualComp matter?

In case you're new to this blog, I wanted to introduce our companion stats site, Behind the Net. To make a long story short, when the Jets left Winnipeg in 1996, there was no way that I could ever be a fan of any other team. So I contented myself with analyzing the game of hockey in general, and Behind the Net was the result. You'll probably find me and some of the other writers on this site making reference to what might seem like obscure advanced statistics - I've put together a 10-part FAQ that I hope will answer any questions you might have about these stats.

At any rate, Dirk Hoag from the Nashville Predators blog 'On the Forecheck' asked a few weeks ago about whether 'Quality of Competition' (aka Qualcomp) Is a significant statistical indicator in driving an individual player's Corsi number (in this case, the percentage of shots directed at his opponent's net as a percentage of total shots by both teams when he's on the ice.) The answer is a bit convoluted, but I'd argue that it is.

Corsi is driven by a number of things, but two keys are a player's 1) offensive vs defensive assignments; and 2) line matchups, both of which are essentially decided by his coach. We use Ozone% (the percentage of offensive zone faceoffs that a coach sent a player out for) and Corsi Rel Qualcomp (the time-weighted average of his opponents' Corsi relative to their teammates) as estimates for each of these. As you can see, the average Corsi among NHL players is higher towards the top left-hand corner (more offensive faceoffs and easier matchups) and lower towards the bottom right-hand corner (more defensive faceoffs and tougher matchups.) 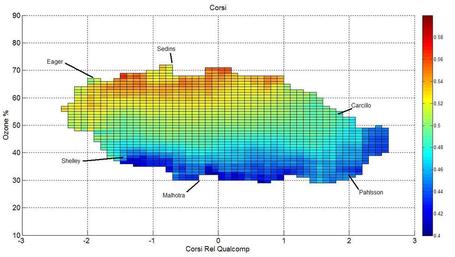 We wouldn't expect perfect correlation because not all players are used in the same situations. We can compare the top 100 forwards to the bottom 100 forwards in terms of Quality of Competition:

The top 100 players faced much tougher competition, started out in their own zone much more often, had much more negative results both in terms Corsi and +/-, but also generated a lot more offense and a lot more events in general. But overall, the effect is roughly what we'd expect - the tougher your ice time, the worse your results.