Share All sharing options for: Scheifele vs Couturier Redux

My previous post had a nice chart in it, but I didn't adjust adjust for historical scoring levels - I got roughly the right result, but I wanted to revisit it today with some reasonable adjustments. I've removed regions that less than a handful of players (or none at all) reached: 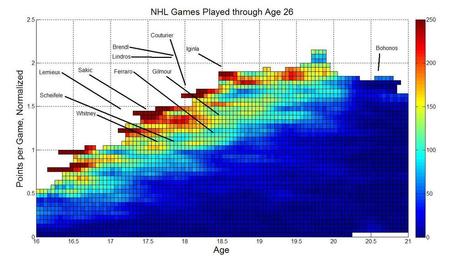 I've put a few big scorers on the chart so that you can see where top scorers have landed historically. Mario Lemieux and Eric Lindros are clearly special talents, but so was Pavel Brendl.

At any rate, you can see the relative rarity of Sean Couturier - even if his Age 18 season was a disappointment - compared to Mark Scheifele. I put together groups of comps for each of them consisting of players who put up within 0.2 PPG of each of them and were within 2.5 months of the same age on draft day:

Only 20% of Scheifele's comps played 244 games or more, so the point should be clear: players who put up numbers like Couturier are four times more likely to be NHL regulars than players with numbers like Scheifele. I know that people have come up with all kinds of reasons why Scheifele isn't really a 4-1 longshot to be better than Couturier, but I'm skeptical - this isn't too far away from hitting on 18 at the blackjack table on a hunch.