On Post-Junior Success; or Couturier vs Scheifele

Share All sharing options for: On Post-Junior Success; or Couturier vs Scheifele

I was a little pressed for time and I'll clean up this chart in the near future, but I have enough here to make my point. I looked at all forwards born 1965-1985 who played in the OHL and split them up by age and the number of points they scored per game. I plotted these two variables against the number of NHL games they then played through age 26. It makes a nice contour plot: 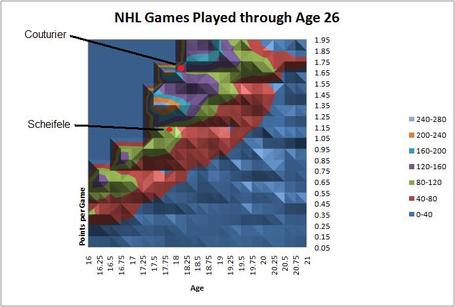 In case you were wondering, the top left-hand corner is empty because there aren't a whole lot of guys who put up a point-per-game at age 16. But the key takeaway is that as you get closer to that top left-hand corner, you're more likely to become an NHL regular. Mark Scheifele projects to play 100 games between now and age 26 - that's perhaps a 25% chance of becoming a real NHL player. Couturier, on the other hand, is almost off-the-chart, and might have a 75% chance of doing the same.

There are obviously other factors here - Scheifele was on a much weaker team, and we have no way of knowing a player's intangibles - but all things being equal, Couturier was a much better pick at the #7 spot. Time will tell if he's the right choice, but you'd better have a damned good reason to play against the odds.

I need to make a few fixes to smooth out this chart and I'll get that done in the near future so that you'll have a much better feel for how to gauge reasonable expectations for a junior player.