Share All sharing options for: Shot Counting, In Pictures.

I've been getting more and more interested in doing visual stuff for the site (I'm pretty jealous of the work they do over at Beyond the Box Score, seriously check those guys out), like charting a few things that could tell us a little story without too many numbers or mind-bending.  One example was TOI charts for defensemen, something I'm going to get back into this summer; I've already done one for this year's Thrashers, so it's something worth checking out.

This time around, I wanted to rehash a problem that's been well covered by a number of stats analysis people including Vic Ferrari, JLikens and Tom Awad, that of shot recording bias.  To do this, I pored over home and away shots-against-per-game figures from the last 10 NHL seasons (I had to get creative with pre-2005-06, by constructing team shots-against totals from individual goaltender statistics as the team splits were hard to find).  More and pictures after the jump.

After getting all of the data together, I took the shots-against differential between the home and away data and charted it over the 10 seasons, using a 3-year moving average and splitting the 30 teams into 6 graphs to straighten the spaghetti.  You'll see on the chart I put in a rough "high" and "low" mark, which essentially isolates any team that moved into the 10% that were over- or under-counting.  Click to biggen. 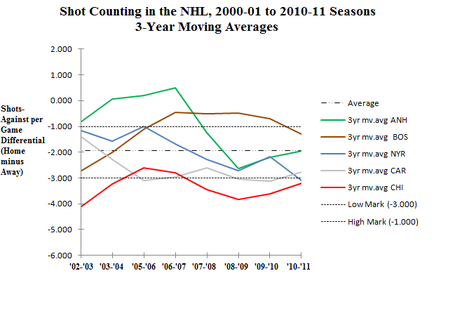 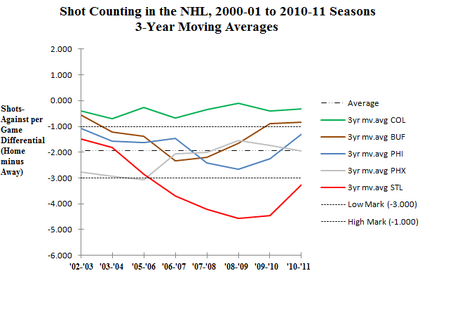 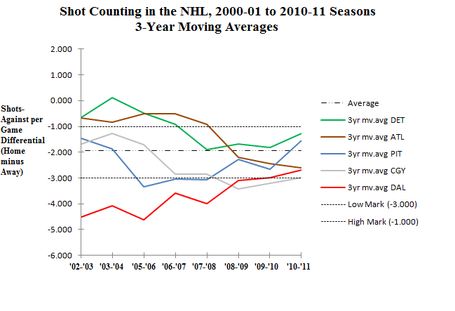 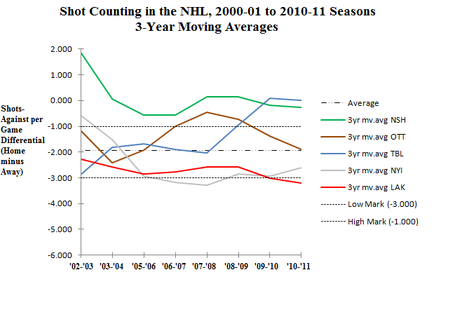 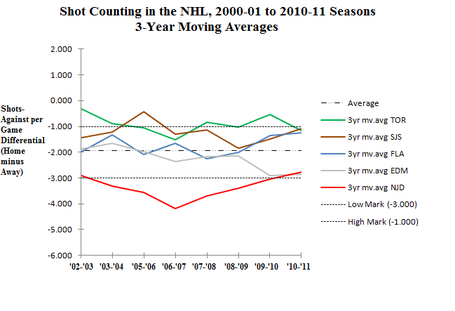 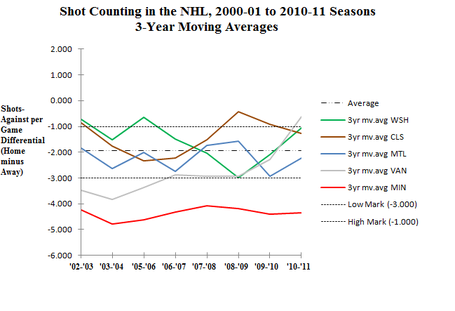 I like the complexity this brings to the issue, in addition to re-affirming some of the long-held suspicions.  The Devils are low on the list, and the Predators are very high.  The Wild were a little surprising, though I vaguely remember an article on how Niklas Backstrom is short-changed by the recording over in Minnesota (must be Gopher students).  The Panthers look good by this, perhaps answering some of the suspicion that guys like Tomas Vokoun and Roberto Luongo were aided by overzealous counters.  The Avalanche appear to have someone almost as consistent as whomever is recording in MN, and I'm hoping that the trend that the Thrashers were experiencing continues in Winnipeg (it's easier to trust your save percentages if the teams hover between those high and low marks).