Without further ado, knowing that further analysis and explanation is to come after the jump, here is the OZQoC graph for Winnipeg's forwards - minimum 10 GP, and including unsigned RFAs and UFAs. 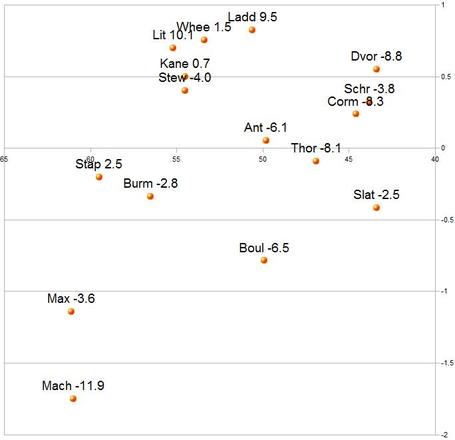 The toughest jobs are those in the upper right-hand quadrant - players with the lowest offensive zone starts to the far right, and those facing the toughest competition up above.  In Winnipeg's case that include Radek Dvorak, Rob Schremp, and Patrice Cormier.  Granted, none of these players got very much ice-time in an Atlanta uniform.  Nik Antropov finds himself in this quadrant but only barely.

Likewise, the easiest jobs are on the lower-left.  These are the sheltered players who started primarily in the offensive zone on the far left, and faced the weakest, fourth-line competition at the bottom.  Last season that included Spencer Machacek, Ben Maxwell, Tim Stapleton and Alexander Burmistrov.

The top-left are those that faced tough competition, but played mostly in the offensive zone, so these could arguably be considered good two-way players, or at least players whose offense was good enough to compensate for any defensive deficiencies.  Here you have Andrew Ladd, Blake Wheeler, Bryan Little, Evander Kane and Anthony Stewart.

Finally, the lower-right are those who faced weak competition, but didn't start primarily in the offensive zone.  You could consider these depth players, and in this case includes enforcer Eric Boulton, Jim Slater, and Chris Thorburn.

Since Relative Corsi can be greatly influenced by both of these factors (offensive zone starts and Quality of Competition), an OZQoC graph is a great way to place possession scores in context.

For example, Alexander Burmitsov mostly played sheltered minutes in the offensive zone, and yet was still underwater possession-wise, unlike nearby Tim Stapleton.  And take a look at Andrew Ladd, who faces the toughest competition, and yet the only forward on the team who was better possession-wise is Bryan Little - but just barely, and possibly because he had a higher offensive zone start.

Long story short, a quick look at this graph can tell you at a glance how each player is being used, and the context in which to consider their numbers.  Here's the OZQoC Graph for their defensemen. 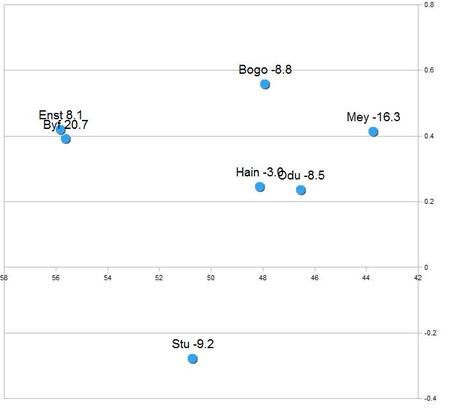 The toughest assignments went to Zach Bogosian, reinforcing those who have argued that he's actually Atlanta's best defenseman.  Freddy Meyer also played some tough minutes, as did Ron Hainsey and Johnny Oduya.

Tobias Enstrom and Dustin Byfuglien got the toughest competition (other than Bogosian), but started primarily in the offensive zone, giving them much better possession numbers.  Note how much better Byfuglien's Relative Corsi number is than Enstrom's, despite being in used in roughly the same role and situation.

The only defenseman that was sheltered last season was Mark Stuart, who started primarily in the offensive zone (albeit just barely), and faced weaker competition - it's surprising that he still managed the 2nd worse possession numbers.

Well, that's the OZQoC Graphs for your new team - keep them handy whenever you're evaluating situation-based statistics.  Being a new thing, this is a great time to make suggestions, so please be generous with your comments.