Who fights in the playoffs?

Share All sharing options for: Who fights in the playoffs?

We have seen quite a physical matchup between the Bruins and Canucks so far. Which got me thinking: who fights in the playoffs? Punks and pests or regular players? You might think that players like that are more likely to fight in playoffs. Or more "at risk" to fight to use the medical terminology (which I think is kind of a funny term). But let's see what really happens.

We all know that there are fewer fights in the postseason. That is understandable because teams are more focused on winning than entertaining. How much less fighting? Over the last 10 seasons 38% of regular season games had a fight. Compare that to only 14% of playoff games with a fight during this same time period.

So on the surface we see that fights are about only 1/3 as likely to happen in the playoffs. But is fighting as a team strategy any different in the playoffs? To answer that we should look at who is fighting. Are punks and pests leading the way as they do in the regular season? Let's put players into categories and look at the results.

For this analysis players were put in one of two categories: enforcers or regular players. Enforcers are players with either >120 PIM or >10 fights in the regular season (many players satisfied both criteria, but were only counted once). This enforcer category was 44 individuals, or just over one per team. I think we can all agree that there are 1 or 2 players like that per team. This category was led by the usual suspects like George Parros with an impressive 27 fights, and Zenon Konopka with an embarassing 307 PIM. Not surprisingly, the enforcers made up the lion's share of the 10-11 regular season fights: 88%. 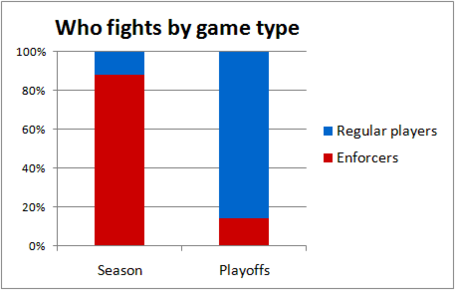 What happened in the playoffs games? The tables have turned dramatically. In the playoffs only 14% of playoff fighters were enforcers. I used the last 3 seasons of playoffs to have a big enough sample size. That percentage is way less than what is expected from the regular season (88%) and is way outside the margin for error. They have essentially flipped. So our "at risk" population was not really at a higher risk after all.

From this major difference we can conclude that the fighting environment is different in the playoffs. Perhaps it is more based on situational passion rather than two goons giving the crowd a show. Maybe enforcers get less ice time. And maybe coaches don't allow enforcers to go causing trouble and risking penalties.