Share All sharing options for: Missing the Net, Redux

Neil had an interesting post last week about the impact of missing the net on goal scoring. He excerpts a scouting book where a scout claims that big goalscorers like Dany Heatley and Ilya Kovalchuk don't miss the net that often. You know what comes next, right? Both Heatley and Kovalchuk miss the net more often at even-strength than the league average...

This got me wondering if any players had an actual talent for hitting and/or missing the net. One key driver of missing the net is how far away you shoot from - here's every player who had 200+ EV shots over the last two seasons: 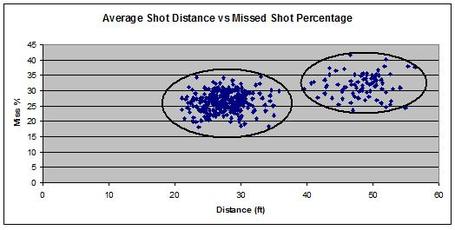 Forwards form the bubble in the middle of the chart; defensemen are the one on the right. Clearly, one component of the "talent" is a player's position, so we'll look only at forwards. And because I don't want MSG's faulty scorer skewing my results we'll only look at road even-strength shots.

What I've done here is randomly select half of each forward's shots and compare his miss percentage to the other half of his shots - and run this across 278 forwards who had a minimum of 100 even-strength road shots the last two seasons. The takeaway: individual forwards tend to shoot from the same locations, but they possess zero identifiable talent for missing (or not missing) the net. At the team level, we see the same thing - zero talent for hitting the net.

As is often the case with goalscoring, players who happen to put the puck in the net are perceived to have all kinds of talents that they don't actually possess. When they score, it appears that they're always hitting the net, but the reality is that they can't control it.