To see an explanation of the methodology to this point, have a look at Part I and Part II.

After the first two posts, there was some discussion of potential bias, particularly in just using the Yahoo Sports "Like" totals, and it was interesting to see how much Canadian teams were slighted by the Yahoo totals vis-a-vis the NHL.com totals. But that's one of the chief struggles, isn't it?...the eager (though over-saturated at times) and established markets in Canada versus the market potential and lukewarm reception in the United States. The kind of bias Yahoo Sports is reflecting more often than not has tipped the NHL's expansion hand towards the U.S., a trend that's changed only recently, and maybe not for long. So as you'll see below, I'm not only going to look at the "Like" totals team-by-team, but also by including both Yahoo and NHL.com totals, as well as using those rankings to make a composite ranking. Additionally, I'm going to divide the North American continent (excluding Mexico and the Caribbean, obviously) and provide some regional totals.

Rather than including all the players on the team's roster, I chose to only use players that have played at least 20 career games. That way, recent rookie call-ups who have only had a handful of games to gather "Likes" and/or influence team "Like" totals aren't messing with our data. I also went with team averages rather than overall totals to avoid any advantages that having more 20+ game players would grant.

Note: The next go-around, I'll re-run this study looking at "Like" totals on the actual team page. I think both approaches have their merits (for this one, you don't have to like the team to like the player, so it could tell you a bit more about non-local markets), but I won't be at a computer this weekend to slap the second one together.

I think this goes a long way towards providing a glimpse of the strength of the markets given the efforts of these teams to market themselves and win games. Despite being very successful franchises and being located near large populations, the San Jose Sharks, Anaheim Ducks, and Tampa Bay Lightning are only now creeping up near the top third of this table, which suggests to me that market creation in the U.S. is a very gradual process. Is it worth it? Sure. A recent ownership hiccup aside for Tampa, and you're looking at three teams that are near-ideal successes for expansion to non-traditional markets. Of course, you're going to have failures; the biggest problem the NHL has is learning to cut bait when the positive variables aren't there. They certainly didn't hesitate in the past. But I'm digressing.

For the next part, I broke North America into regions, to see a little bit of the ol' regional bias playing out. Once again, I used Yahoo and NHL.com "Like" totals. 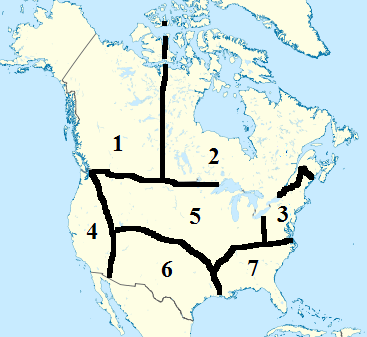 I had to do some gratuitous lumping of populations, particularly when pushing the Quebec and Ontario/Manitoba provinces into the same region, but I didn't want to leave any one region with a single team. I think these divisions do a fair job of toe-ing the line between that and defining somewhat distinct populations.

Previously, I was kind of joking when I suggested this was a bit of a popularity contest, but if you were to identify the Yahoo numbers as a "layperson's" NHL crowd and the NHL.com numbers as a "more diligent" NHL crowd, it's interesting to see the disparities. I think these data bode well for the future of the California markets, and to a certain degree the Southeastern U.S. markets. I'm not about to say the Southwestern U.S. is screwed either, because Phoenix really drags down the numbers.

Stay tuned...in the future I'm going to look a bit further into what are driving these results for both players and teams.