I got a head start on my summer reading list thanks to Tampa Bay Lightning's sweep of the Washington Capitals. First up was The Art of Scouting by Shane Malloy. It gives some good insight on what scouts look for and will definitely have me watching the game a bit differently. What piqued my interest was a quote from Carolina Hurricanes head scout Marshall Johnston in the section on Shooting Accuracy vs. Power:

The biggest difference in goal scorers is from continually missing the net to getting shot after shot on net (Mike Bossy never missed the net – including in warm-ups).

Is accuracy the biggest difference between average and great goal scorers?

I think we would all agree that the more shots put on net, the more goals will find the back of the twine. San Jose Sharks director of scouting Tim Burke also believes in the importance of accuracy, specifically, not missing the net:

Number one is not missing the net. I think with a lot of these scorers, like the Heatleys and the Kovalchuks, they don’t miss the net that often.

Using 5v5 individual shooting data from Behind the Net I will take a look at the correlation of how often a shooter misses the net to his goal scoring prowess. I am going to look at every NHLer that has taken more than 50 total 5v5 shots (goals + shots + misses) in each of the past four years, giving us a pool of 2,226 skaters to draw from.

The first set of data are players grouped by even strength goals scored and their miss percentage, which is missed shots divided by all shots taken (goals + shots + misses). 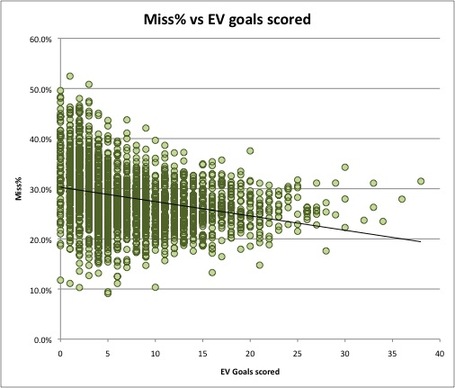 The book draws from decades of scouting experience and the quotes above were probably meant to convey more shots equal more goals over the course of a season. However, minimizing the number of missed shots (as a percentage of all shots taken) does not seem to be directly correlated to a skater's ability to score goals when skating 5v5.