Share All sharing options for: Getting Defensive: Florida Panthers

"Getting Defensive" is a weekly look at the defense corps of the 30 NHL teams using the Time On-Ice (TOI) data from the 2010-11 regular season.  For a general introduction to the inspiration and methodology, please see this post.

The Florida Panthers came into the season with relatively low expectations, having ended the previous year near the bottom of the league and having made only minor additions to their roster (though it's worth noting David Booth stood to return from injury).  Conversely, the Panthers lost a solid, tough-minutes forward in Nathan Horton (via trade for Dennis Wideman and a 1st rounder that became solid prospect Nick Bjugstad) and an average, big-minute defenseman in Keith Ballard.  By the end of the season, despite these subtractions and the later exodus of Dennis Wideman, Bryan McCabe, and Bryan Allen, the Panthers played better defense than they had the previous year (2009-10 5v5 SA/60: 33.5; 2010-11: 30.8) alongside their expected drop in offense.  In fact, the departure of Wideman, McCabe, and Allen resulted in an almost-negligible change in shots-against (I guess that's not too surprising, in retrospect).  In sum, the Panthers got younger, and have the base and prospects (Erik Gudbranson, Jacob Markstrom) to be a solid team in 3 to 5 years.  Dale Tallon might be able to do it again.

A bit of a surprise this year was the drop-off in Tomas Vokoun's play (down to a 91.9 ESSV% from ~93% the previous 3 seasons), possibly the result of some dings during the year as well as a growing distaste for newly-departed coach Pete DeBoer.  Though it was a little touch-and-go, apparently DeBoer's firing has Vokoun a bit more interested in sticking around, which is good because Markstrom could use a couple more years to see some pucks.  The young defense will benefit from learning with an above-average goaltender behind them. 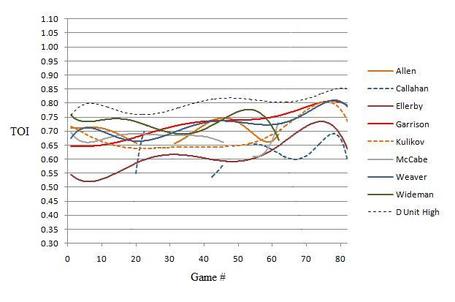 Yeah, buddy, another spaghetti factory.  What you can see, though, is that you have a lot of defensemen getting very similar ice time, with the young guys kicking right into the roles left void by McCabe, Allen, and Wideman. 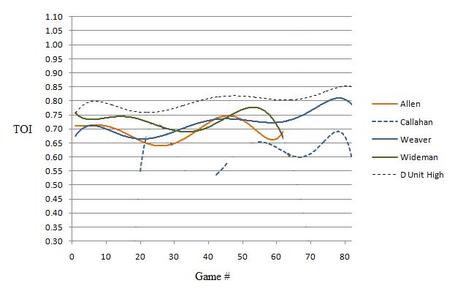 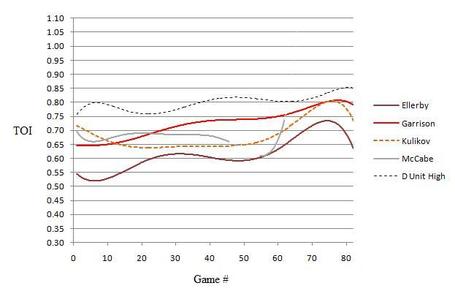 Garrison grew into a tough-minute role alongside Weaver, and they played admirably.  Dmitry Kulikov and Keaton Ellerby saw upticks in their minutes, and they both played quite well despite neither having been long for the league. 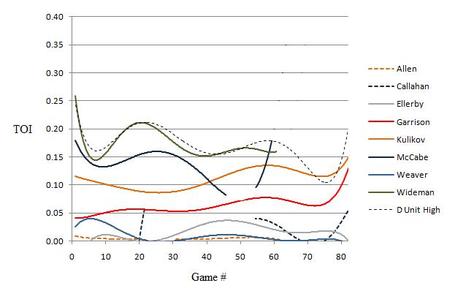 This particular set of TOI's was definitely thrown off by the departure of McCabe and Wideman. 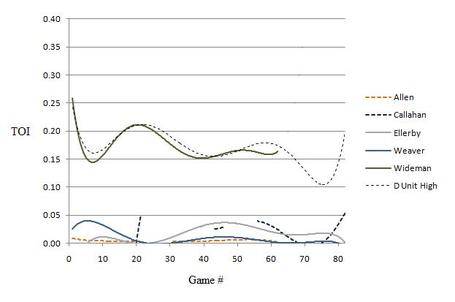 Joe Callahan was really not much of a factor in his cup of tea in the NHL, and that's okay because he wasn't particularly impressive.  Ellerby's time on the powerplay was minimal, and I don't think that's going to change anytime soon. 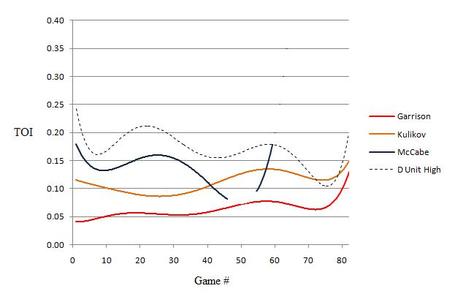 McCabe's "movement" was as much from him having some minor injuries, but Kulikov and Garrison were legitimately moving into PP roles.  Garrison hasn't been particularly known for his offensive prowess, at least not since his time in juniors, so he might just be keeping the seat warm for Gudbranson. 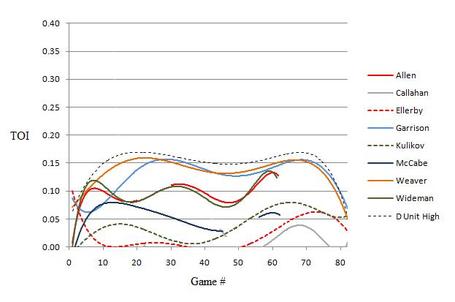 Call me corny, but don't some of those lines look like they're swimming together underwater?  Beautiful. 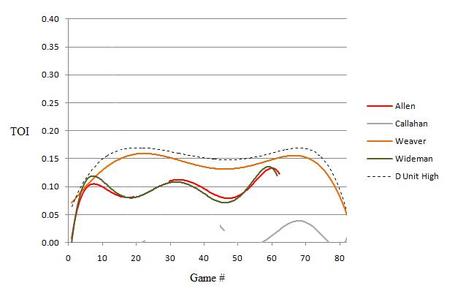 Can you tell that Allen and Wideman paired together?  Once again, Mike Weaver is a stud. 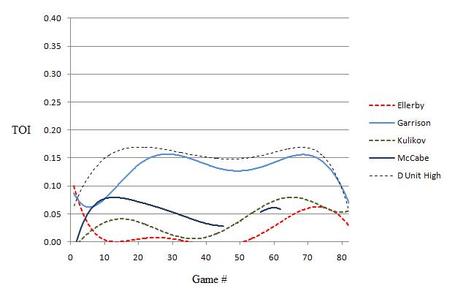 As with the even-strength minutes, Garrison became an important part of the defense as the year went on.  It was good to see the Panthers giving Kulikov gradually tougher minutes, as he responded well.  Ellerby could possibly replace Weaver someday.

I will be very interested to see the development of this team over the next couple of years.