While I was running a correlation study for another project I’m working on, I decided to quickly measure the correlation of many individual statistics and their contribution to team points percentage (P%), and an even strength individual points per 60 time on ice (P/60) inter-year, that is between years. Briefly looking over the list I noticed 2 interesting things. First, goals (EV G/60) and first assists (EV A1/60) were well correlated with points, 0.859, 0.819 respectively. However second assists (EV A2/60) lagged behind quite a bit limping in at 0.556. Given the substantial amount of emphasis everyone around the NHL places on the amount of points a player earns, I began to wonder if anyone had thought about how much each of these stats (G/60, A1/60, A2/60) should be weighted. Currently the traditional points treats them as the same, but even intuitively one can probably conclude that a goal scored by a player is much more predictive of a good player than a 2nd assist. In the next couple paragraphs I will outline the methods I used to reach my conclusions which you can skip ahead and read at the bottom.

A1/60 - even strength first assets per 60 minutes ice time

A2/60 - even strength second assists per 60 minutes ice time

I began with the hypothesis that totaling goals and first assists without 2nd assists would be a better predictor of future points than totaling goals, first assists, and second assists. Ultimately I knew using split-half season reliability (ala JLikens- using even and odd # games to correlate 2 or more variables) would be the best method, but with limited time I decided to use inter-year data from the 2006-2007 season through this year (2010-2011) with a minimum of 20 games played. This totaled 2040 player-seasons worth of data which I thought would be adequate. This sample may skew the results as players that are capable of 4 consecutive years of 20+ games played are probably above average NHL players.

My first thought was the throw out second assists completely, and see if that correlated with the previous and next year’s points. As is obvious when I looked at the data, it was hard to compare this new stat, I call Adj P/60 (adjusted by subtracting second assists) and points because I was reducing the point totals. Consequently I knew I needed to find a fudge factor to rectify this, and at the same time I decided to run a least squares regression with second assists thrown back in to see how much variance it accounted for. This gave me a new look at the data, with some interesting results. Shown below

What I really found interesting is the coefficient column. This describes in general how much a variable influences points. That is if we ran the same regression with inter year data, each variable (goals, assistis) would be equal to 1 because every time you record a goal, you increase your points by 1. However here we see that simply isn’t the case. Goals and first assists seem to be much more predictive of points than second assists.

Following this data I decided to come up with a different stat. Instead of throwing out second assits completely, I would weight each variable accordingly to give the best R^2 to points. Thus the waP/60 (weight adjusted points per 60 minutes ice time) was born. Below you can find the regression statistics for its predictive power as well as for completeness I included points itself, and Adj P/60. 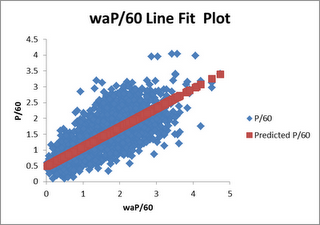 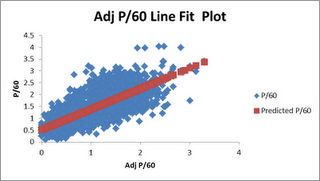 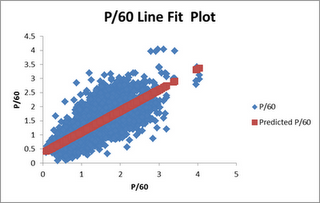 You may notice that the first regression shows a slightly better correlation coefficient, and you would be right. When taking this data into account I also wanted it to be reliable (inter-year correlatability). I modified the formula slightly by again running R^2 values to derive the best weight. This adjustment didn’t alter the waP/60 predictive power of future points very much; it just boosted its reliability as a stat, which I thought to be very important.

I next thought to correlate this data with team points %, that is how likely players with high waP/60 are on good teams. My initial hope was a better correlated number than P/60. When the data came out and showed that it wasn’t, I was a bit disappointed, and thought that I might be stumbling into garbage in garbage out analysis.

Now that we have a stat that can predict future points, to a minor degree reduce team influence, as well as improved reliability we can look at some data to find some interesting conclusions. I decided to look at how players faired between the two stats, so I ranked them for each year accordingly. Here is the data.

Not too much movement in the top 25 though you can see from the waP/60 rank change column (this is the waP/60 rank – P/60 rank; and thus how a player moves up and down in ranking well looking at waP/60 as compared to P/60) certain players can be well over-valued as compared to other players that are undervalued. For example Marian Gaborik and Ilya Kovalchuk jumped of12 and 15 spots respectively, clearly indicating they were undervalued, as Dany Heatly and Paul Statsny were a bit overvalued.

Rick Nash, Phil Kessel , Jerome Iginla, and again Ilya Kovalchuk seem to benefit the most from this analysis, with David Krejci and Derik Brassard coming up well overvalued.

Some more movement now with lots more jumping around. Joffrey Lupul, and Joe Pavelski come in the most undervalued. Not much in the way of overvalued players this year.

Again we see some similar results from previous years. Big movers this year include Semin, Roy, and Grabner. Interestly Henrik Sedin seems to be very overvalued.

Although there is not a massive amount of movement, I still feel waP is a better metric when looking at points. In subsequent studies using a larger data set including intra-year correlations might very well tease out some of this information even more, and get a better weighted formula for points. For now I think this is a good observation from a long overdue adjustment.