Share All sharing options for: Getting Defensive: Atlanta Thrashers

"Getting Defensive" is a weekly look at the defense corps of the 30 NHL teams using the Time On-Ice (TOI) data from the 2010-11 regular season.  For a general introduction to the inspiration and methodology, please see this post.

As you might've noticed, I've kicked off the "Getting Defensive" series with a couple of non-playoff teams (Toronto last week, Atlanta this week).  I'm going to start with non-playoff teams so that I can apply this later to teams that qualified for the playoffs, with the intention of revealing if there are further TOI differences in the playoff season.  As you also might've noticed, in general I will focus on defensemen that fit a regular role with the team, rather than those getting 5-game snippets here and there.  In the case of Atlanta, Mark Stuart clearly filled a regular role after his arrival via trade and Brent Sopel's departure, evidenced by playing every day for the remainder of the season.

For the Thrashers, it was a tale of two half-seasons, one where the bounces went their way, one where they didn't.  And it wasn't very clear that that was the case on the surface, since what looked like a good first half (20-15-6) was really an opposition shooting gallery on Ondrej Pavelec (~34 SA/G), and what looked like a bad second half (14-21-6) saw an impressive reduction in shots-against (~29 SA/G), with only a small adjustment to shots-for.  As a result, the full-season Corsi 5v5 data (30.4 SF/60, 31.4 SA/60) masks this interesting storyline.

The Thrashers defensive corps held an interesting storyline as well, where Zach Bogosian was handled with kid gloves rather than given major minutes early on, and both he and Ron Hainsey rose to take substantial roles in the second half.  Guys like Brent Sopel and Johnny Oduya paved the way for Dustin Byfuglien and Tobias Enstrom to receive a massive chunk of the powerplay time, and the latter two defensemen responded with 2 of the 3 best offensive years in the history of the Thrashers' blue line (Enstrom had the other one last year). 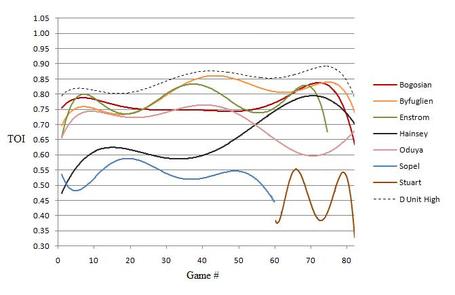 The aforementioned Sopel-Stuart TOI swap is pretty apparent here.  You can see that there's a lot of static TOI going on. 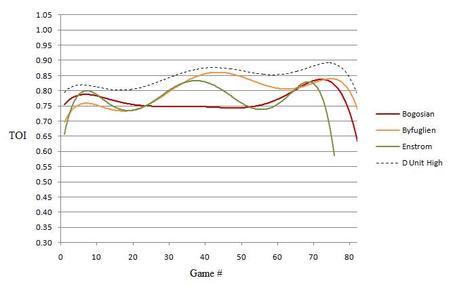 Don't be startled by the Enstrom drop-off; he was getting pretty dinged up by the end of the year. 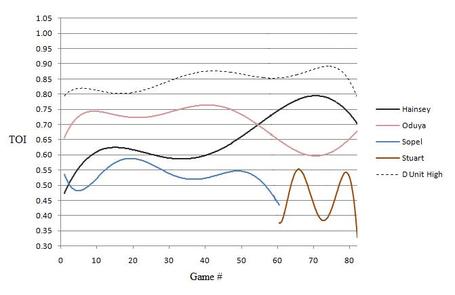 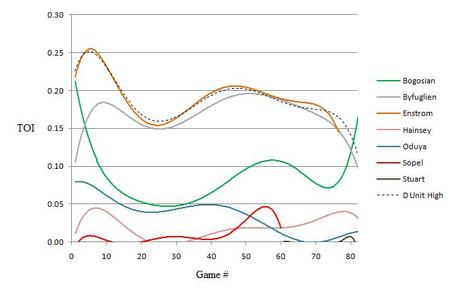 Like I said: a lot of PP time for Byfuglien and Enstrom. 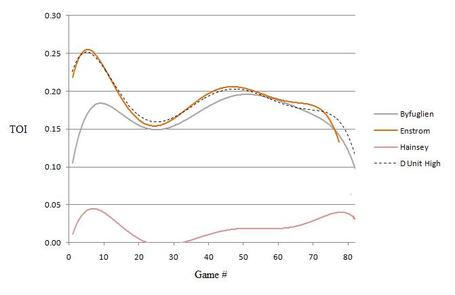 Hainsey goes up and down a little bit, and slightly rises later in the year despite the team's total PP time dropping.  A bit of a mover, but not quite up to mover/shaker status for me. 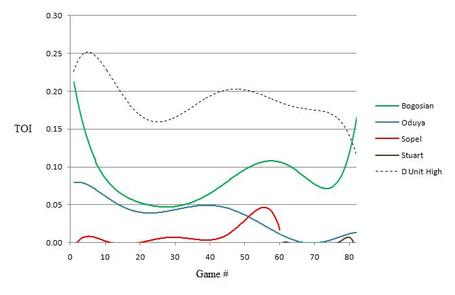 A lot of people were eagerly anticipating Bogosian's development, but not long after an initial trial much of the PP time went towards Byfuglien, at Bogosian's expense.  It would rebound later in the year.  What little PP time Oduya had disappeared, at first to Sopel and then over to Hainsey. 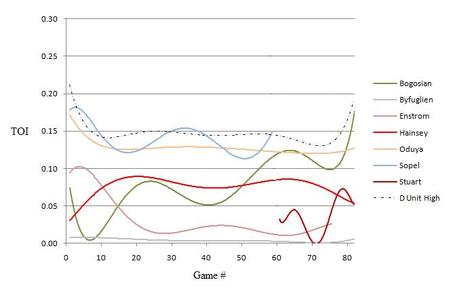 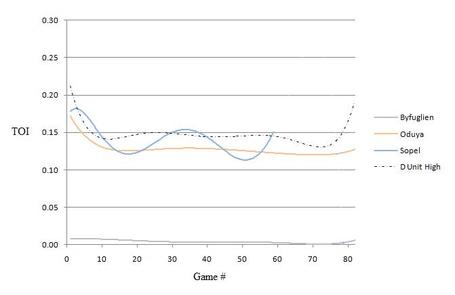 Though it's debatable how big of a loss this was, it's clear that Sopel was being heavily used in SH situations (not to be confused with "shit" situations).  And Byfuglien doesn't do SH, haha. 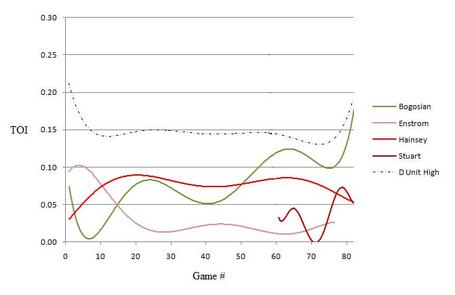 Enstrom, interestingly, was dropped from SH situations rather quickly, and those responsibilities were spread to Hainsey and eventually Bogosian.  Stuart seemed to get some of that time when he came aboard, but Bogosian's time really took off after Sopel's departure.

After last week, I gave the moving average a test-run on the data, and basically found it was bringing me to the same TOI conclusions with messier charts.  So I think I'm going to stick with the polynomial trendlines.

It'd be interesting to see if the coaches' decision to turn to Bogosian and/or Hainsey was rewarded by strong play, resulting in the better shots-against numbers for Atlanta in the second half.