Antti Niemi's performance has followed an odd pattern - huge successes followed huge collapses.  Here, we can see his road 5v5 save percentage after winning the Stanley Cup and signing his four-year contract with the San Jose Sharks, just in time for the playoffs: 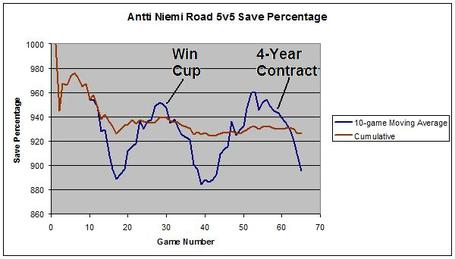 Those numbers are still pretty good - Niemi has been one of the best goaltenders on the road over the last four seasons:

We're ignoring half of his record in an attempt to remove home-ice scorer bias from our analysis, but the long-term view suggests Niemi is probably a pretty good goaltender.  Interestingly, Chicago has almost exactly replaced Niemi's performance with Corey Crawford, and San Jose got a cheap goaltending tandem to replace Evgeni Nabokov.  The only question mark is why the Sharks lacked confidence in their ability to find a cheap goaltender yet again next season.