Anybody know where the Faceoff Dot is?

Share All sharing options for: Anybody know where the Faceoff Dot is?

One thing I've noticed is that the NHL's official scorers aren't quite sure.  Here's a plot of reported faceoff locations over the last ten seasons: 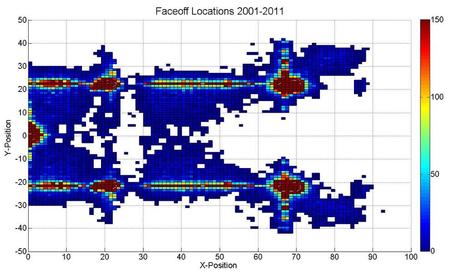 What a mess!  Not only are the scorers not even sure where center ice is located, but they have all kinds of phantom faceoffs in the middle of the offensive zone and in the corners - in some cases behind the goal line!

So which rinks are particularly bad at finding the dot?  Five arenas reported at least double the number of phantom faceoffs as the sixth-place spot:

I can accept that it's difficult to get shot locations exactly right on the fly, but faceoffs?  It's time for these scorers to shape up or ship out!