Share All sharing options for: Getting Defensive: Toronto Maple Leafs

"Getting Defensive" is a weekly look at the defense corps of the 30 NHL teams using the Time On-Ice (TOI) data from the 2010-11 regular season.

Having spent a lot of time thinking about the kinds of information that could help us better understand defensemen, I noticed that while forwards can be pretty well expressed by their capabilities on offense, defensemen that receive powerplay minutes almost universally outscore their fellow defensemen by a considerable margin.  This can muddy the picture of what a "good defensemen" might look like.  Tom Awad has suggested that, in terms of skaters in general, a loose but helpful definition of "good players" might be best guided by playing time, and that good players for the most part will be recognized by the coaches and given the most time.  It's an excellent read, by the way, worth your time if you haven't looked at it.

In the spirit of Awad's article, I wanted to review defense corps across the league, showing the increases and decreases in playing time and the effects of trades, injury, etc.  I chose the Toronto Maple Leafs for the first instalment because they give us a good example of a team that has experienced significant upheaval, losing two major minutes players (Francois Beauchemin and Tomas Kaberle), and seeing the increased playing time of a couple of new, younger defensemen (Keith Aulie and Carl Gunnarsson).  There will be pictures...

A few notes on methodology: I went by game-by-game TOI data, but to get a good idea of player usage I split them into even-strength, powerplay, and shorthanded minutes.  Also, to iron out the noise and make for a clearer chart I used polynomial trendlines; plus, I think the trendlines will closer mirror the observations and reactions a coach might make.  I included a trendline for the highest TOIs among the members of the defense unit, so as to provide a better idea of where each defenseman stands in the team.  Finally, I excluded players that played fewer than 20 games, though if there is a player that filled a gap I might throw him in there.

*Note: In the case of all of these charts, click on them for a larger version. 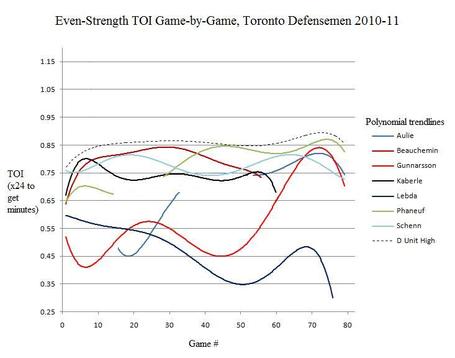 That's your general chart, so you can bounce the various TOI's off each other.  What might be more interesting are the "mainstays" and "movers and shakers" charts... 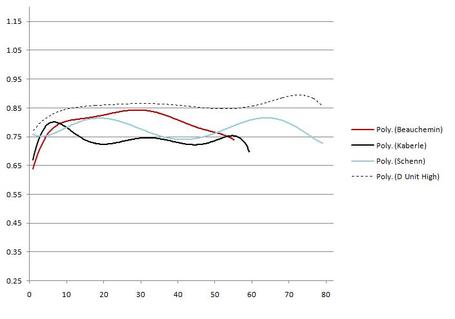 Few surprises here, though it does emphasize how important Beauchemin and Kaberle were. 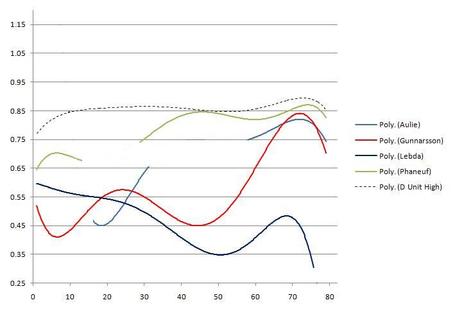 As you can see, Aulie and eventually Gunnarsson filled the gaps when Beauchemin and Kaberle left here, while Phaneuf moved up even higher. 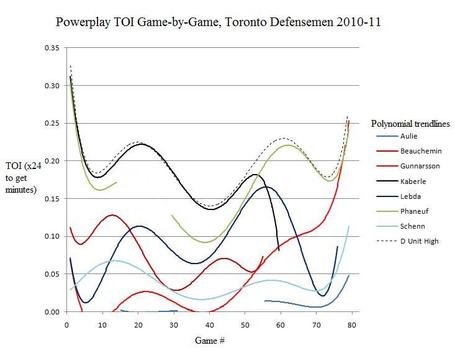 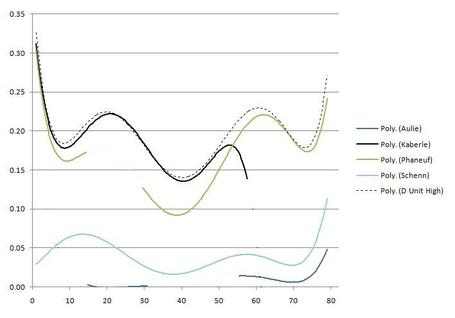 Not surprisingly, Kaberle was almost always the team leader in PP TOI, and when he left Phaneuf became the main man. 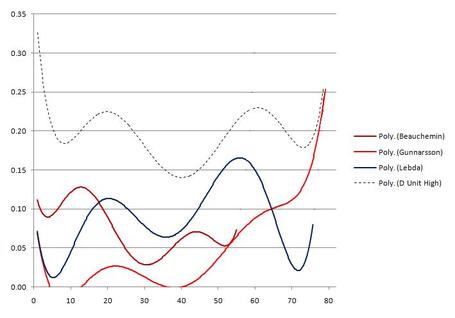 Beauchemin was a bit of an every-minute D, but his PP numbers dipped a bit about 25 games before he was traded in favor of Brett Lebda.  Lebda's brief moment in the sun was soon eclipsed by Gunnarsson. 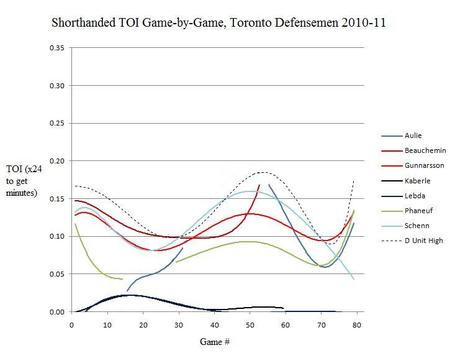 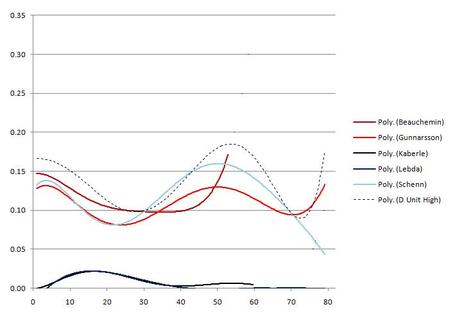 As you can see, Kaberle and Lebda are not exactly relied upon for their shutdown D. 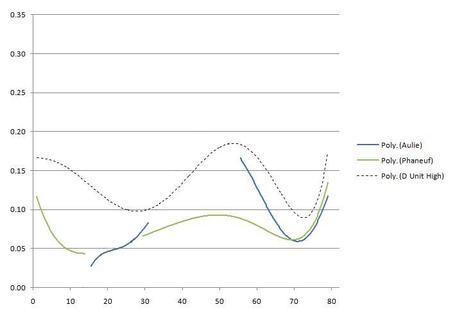 At least initially, it was not Phaneuf who took up the slack when Beauchemin left, but Aulie.  Since then, it appears that they've split the difference.

As this is the first in the series, I'd like some feedback on the structure.  Would you rather I omit the first charts with all the TOI's, and just use the "Mainstays/Movers" charts?  Or keep all three?  Would you like the TOI numbers as well?  Month-by-month rather than game-by-game, perhaps?  I purposely left them out to avoid clutter (for relatively the same reason I used the polynomial trendlines).

P.S.  Shoot, first try and I missed a player (Mike Komisarek).  Komisarek's ES TOI figures have hung around 13 minutes (or rough 0.50 on these charts) all year, and his PP TOI is almost non-existent.  As for SH TOI, it has fluctuated from near the high-end on the team early in the year, to very low in the middle of the year, rebounding a bit with Beauchemin's departure, and now back down again to the previous lows.