The Habs started the season on a strong swing, bolting atop the division, before fading in the standings. The Bruins overtook them and (almost) never looked back.

There is padding on the phone booth's stanchion, so let's get this thing rolling, shall we?

First, a word about me: I've been recording the hab's scoring chances (en français) ever since the beginning of last season. Las season, Gabriel asked me to do a preview of the Washington-Montreal series. I loved doing it, so here we go again.

How they rolled along during the season

I find rolling percentages to be a very nice way of laying out some context. The next four charts all represent 20 games rolling averages at even strength with the score tied, hence 63 data points (from game 20 to 82).

First, PDO, that is the sum of save percentage and shooting percentage. How a PDO number veers from 1 gives us a rough idea which way luck swung over a given 20 games span. 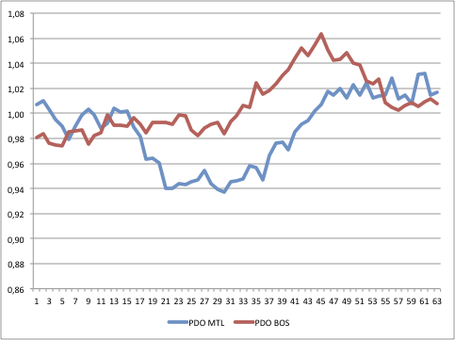 So both team struggled early, with Boston keeping things even before taking off in the new year and finally coming down to earth. The habs crashed for some time but actually had a pretty nice run over the last third of the season. Let's see how things break down. 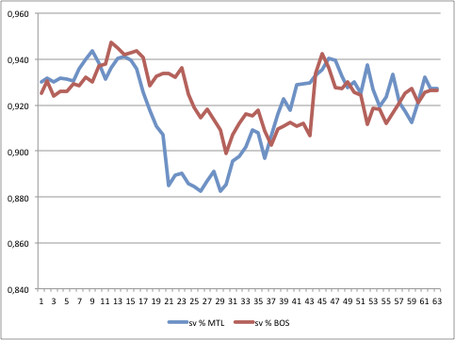 Tim Thomas just had a fantastic season, but Price's december swoon mask the fact that he's been pretty darn good ever since. Many people give the Bruins a faire edge in goaltending, but I don't buy it. Price is every bit as much a difference maker as Thomas.

How about team shooting percentage? 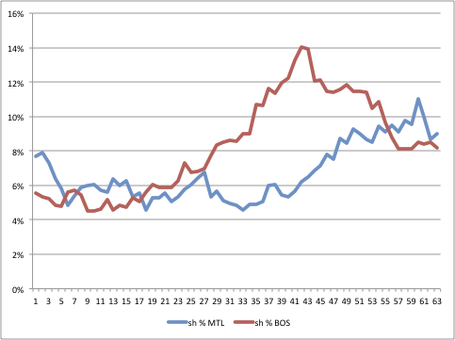 Look, I have to publish this thing but I forgot to ask Gabriel whether or not I'm allowed to swear around it, so I'll quote one of my favourite bloggers.

A 20 game run with a 10-14% conversion rate with the score tied? Lordy... The habs shooting has been crappy for a long time but actually picked up somewhere in february. All in all, you look at both team's season results and a lot of what distances them can be chalked up to luck. Which, as a Habs fan, makes you feel good and as Bruins fan makes you feel like I'm in denial. Enter chart #4, 20 games rolling average of Corsi% with the score tied. 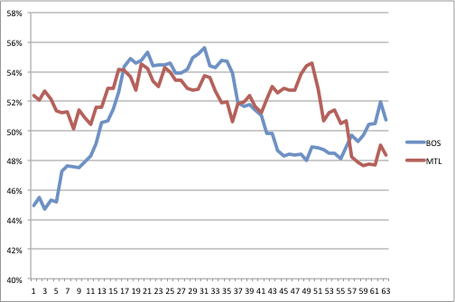 The Bruins had a nice mid-season run, but the Habs were consistently good to excellent at driving possession at even strength with the score tied. But you look at the red line, there is a clear tipping point toward the end. That point is game #21045, Washington winning 4-2 at the Bell Center. That game, Tomas Plekanec and Jeff Halpern both left in the second frame, injured. They both came back against Boston 10 days later and got thoroughly pounded, clearly still injured. Halpern has since been scratched for a "lower body injury" while Plekanec has only been a shade of his former self.

Both teams have a similar approach when it comes to dispatching the job between the first two forward lines, the first line having to shut down the opposition's best, the second line being meant to provide offence against whomever happens to take defensive zone draws among the other team. While the Bruins bottom two lines are fairly well defined, the Habs bottom-6 is more of a mix and match affair, Jacques Martin opting for different combinations to suit the opposition's strengths and weaknesses. 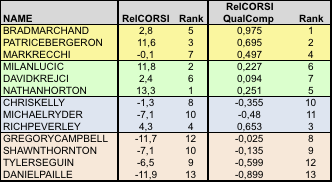 Looking at the kind of competition they were up against, Marchand/Bergeron/Recchi are the heavy lifters here (numbers are from behindthenet.ca; Peverley and Kelly's numbers are obviously skewed from their time with Atlanta and Ottawa). Let's use Corsi and Zone Starts at even strength to get a better grasp of how each line fared. 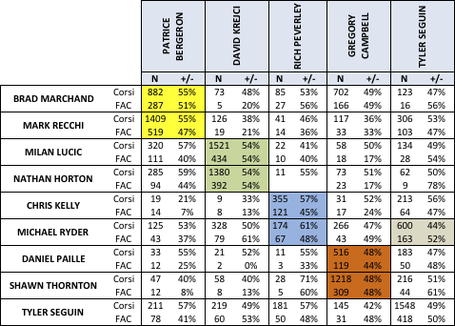 First, a word on how to read those charts. For each players, there are two sets of data, faceoffs (FAC) and Corsi events (that is the sum of goals, shots on goal, missed shots and blocked shots). This is for even strength play only and include empty net situations. Looking at Brad Marchand's line, we see that he was on the ice with Bergeron for 882 Corsi events and 55% of those events were by the Bruins. That means they handily outshot the opposition and spent quite more time in the offensive zone. Marchand, always at even strength, was on the ice with Bergeron for 287 faceoffs, 51% of which were in the offensive zone, a slightly favourable starting position ratio. Only offensive zone and defensive zone faceoffs are accounted for here.

That first line is a beauty, isn't it? Toughest competition available, not overly-favourable zone starts, great puck possession numbers. The importance of getting Peverley and Kelly on board is more apparent here: they gob up a lot of defensive zone faceoffs and do a pretty good job of carrying the play to the other side. I suspect they mainly do so against the other 2nd and 3rd lines, but it certainly gives Julien a nice way of padding Krejci's zonestarts and keeping the otherwise effective Campbell (and his maybe less effective linemates) away from the oppositions hardest matchups while taking a healthy dose of defensive assignments. This is a deep forward corps with each line having a well-defined role in which they can excel. This also is a healthy group, a very good thing to have entering the playoffs. 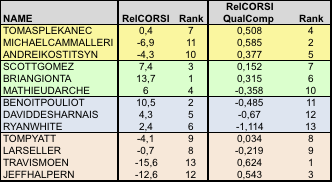 The Habs have a top-4 (Cammalleri/Plekanec and Gomez/Gionta) and then a bunch of guys Jacques Martin shuffles around depending on who's actually healthy that day. There are a lot more rookies in there and injuries are looming large. 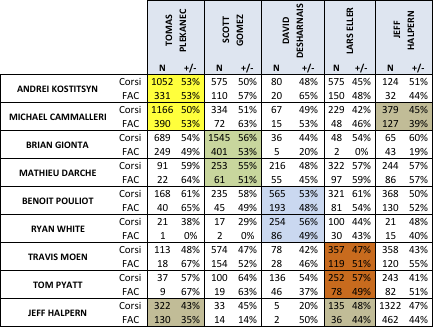 Haven't looked at it in details, but I suspect zonestarts are up there across the board because the Habs played a lot from behind this year. But still: Plekanec can usually hold his own against anybody and Gomez, even tough he had ghastly counting numbers and has faded, still can drive possession when paired with Gionta. Desharnais is green and perfectly apt at crushing soft competition, but he needs sheltering. Eller hasn'ty been as sheltered as #58 and thus isn't looking as good, but he faced decent opposition earlier in the year while paired with Moen and Kostitsyn and fared pretty well.

This is a very versatile and deep group, but there are just too many injuries. Pacioretty, for one, is light years ahead of Darche and made a killer combo with Gomez and Gionta (he was quite the poison against the Bruins, no?). Then there is Halpern; a terrific value, he sopped up a bunch of defensive zone assignations early in the year and, once both Eller and Desharnais were ready to take a regular shift as #3/4 centers, he was sent on Plekanec's right wing. As you can see from both end of the graphs, their job was one of extreme defensive assignments and they did a pretty darn good job at it. So that is a second heavy lifter gone. And, last but not least, Plekanec: he is the team's best forward, plays all the time against the opposition's best. Even tough he's back, he isn't healthy and hasn't looked that good lately (except against Ottawa and Toronto, but I don't find that convincing). Maybe the rest gave him and Halpern enough to get back in shape, but I doubt it. As it is, Martin must put Kostitsyn with Plekanec, a move that leaves the bottom-6 a bit short of tough minutes players; I doubt Eller is ready to efficiently take on Peverley while flanked with guys like Pyatt and Moen.

Well, there is Big Z and then there is the rest. Kaberle's numbers are screwy from his days in Toronto, but otherwise, this group certainly isn't as deep as the forward corps. 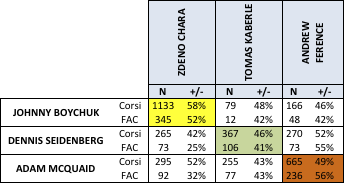 So Kaberle and Seidenberg seems to be the primary defensive zone faceoffs takers? My guess would be that those numbers are somewhat driven by score effects. I doubt Chara will sit for long on the bench with a one goal lead and 5 minutes to go. Seidenberg and Kaberle otherwise look serviceable, but Ference and McQuaid look flat out brutal. They are sheltered and still slide all the way back to Thomas.

Well, Subban is the star here, no doubt about it. After starting the year on the third pair, season-ending injuries to Markov and then Gorges had Martin try him with Gill after new year's eve. By the end of january, they were (and remain to this day) the first pair, always sent out against the opposition's most dangerous offensive threats. 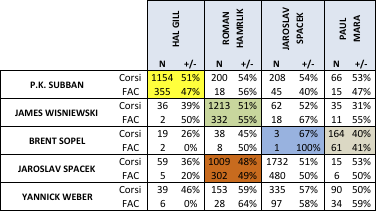 Subban and Gill are getting the job done, period. Gill's efficiency only increases as the year goes on for a very simple reason: referees are more and more tolerant after the new year and Gill can thus interfere, hook, grab and bear hug to his content. Hamrlik too. So a lot may be written about the habs defense being old and slow but the fact is that they are pretty good at doing those things that aren't officially allowed but are actually tolerated. Hamrlik and Spacek have been reliable tough minutes eaters ever since Martin got them together early last season, but it looks like Martin is keeping Spacek (who just got back from a knee injury) on the third pairing with Sopel while Hamrlik will play with Wisniewski. Quite honestly, I don't expect that to last long. Sopel is just too slow and I think it won't be long before Martin reunites the old Czechs.

Injuries are part of the game and being (mostly) healthy at the beginning of the playoffs is a huge advantage. So health amongst the forwards and a more experieced bottom-6 outweight, IMHO, the fact that Boston's defense lacks depth. If both Plekanec and Halpern were, if not completely healthy, at least effective, I'd say the habs could make it, but that doesn't seems to be. They'll fight to the bitter end, tough.