An Abject Lesson for Dallas in the Law of Averages

Share All sharing options for: An Abject Lesson for Dallas in the Law of Averages

On December 26, Dallas had 46 points and was at the top of the Western Conference. New Jersey had 20 points and looked to be cruising to a last-place finish. So I polled you guys and asked you to tell me which team would put up more points over the rest of the season. I even biased the poll in favor of the outcome I wanted (New Jersey vastly outplays Dallas) and yet you put the over-under at Dallas +7. The actual result? New Jersey +12 (61-49), which was in the 86th percentile (possibly higher) of your estimates.

Now you can be excused for guessing poorly because you don't really have anything riding on the outcome (compulsive gamblers excepted.) But Dallas' front office did - if they had accepted that they had 50/50 odds of making the playoffs and would be, at best, the worst team to make the playoffs, they would have dealt aggressively to improve their team in the future. Unfortunately, Dallas never quite realized how bad they were.

Their big problem was that they didn't control the play in any way - in fact, they were probably the worst team in the league in shot differential. Here's the cumulative score tied Fenwick for our two subject teams: 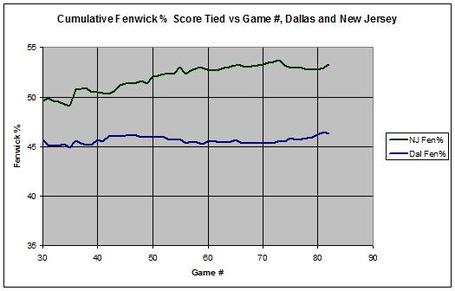 But when you're still in positive territory in the goal-scoring department, you tend to ignore the harsh realities of Fenwick. And that's exactly what happened here: 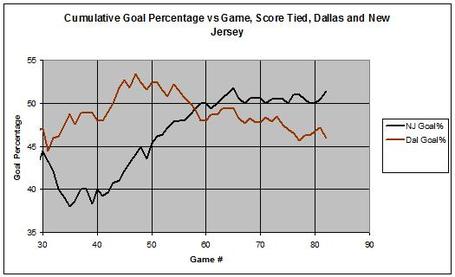 Dallas decided they were going to challenge the PDO monster...But they lost. As you can see, PDO converges very harshly towards equilibrium at 1000: 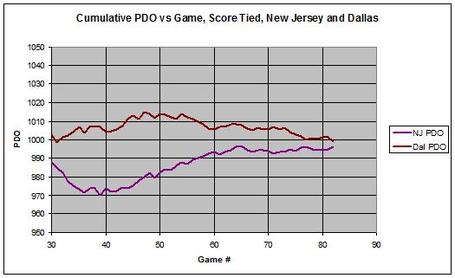 Make no mistake: New Jersey was always a good team, and Dallas was never a playoff team. Sure, there was a narrative to be written about the Stars and a lot of hoping and praying to be done, but an honest assessment of their team would have suggested another rebuilding year. You can argue that the media, fans and perhaps even Dallas' future owners are so unsophisticated that they can't see the folly of chasing an 8th-place finish and it very well may be true. But at some point, that will cease to be true among owners, and GMs who fail to correctly evaluate their own teams' strengths and weaknesses won't be able to claim that their moves were defensible.