Imagine my surprise upon looking at Gabe's bio to the left and seeing that he has truly offended the hockey gods. A composite stick? Surely he cannot be serious. Well, feast your eyes on this data, Desjardins: 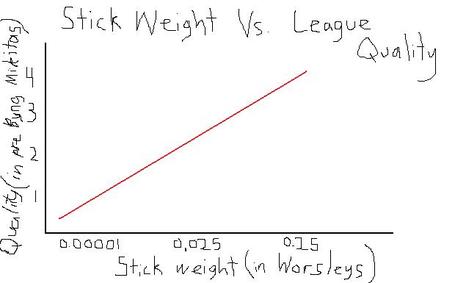 For those not clear on the value of a Worsley, it's about 21 stones. I don't think pre-Byng Mikitas need any such explanation. The fact of the matter is that you need a good weighty stick if you want to a.) look good, and b.) not play like a Lady Byng candidate. When I was a kid, I used a modified stop sign; Fats played with a lead pipe he lifted from his neighbor's water pump and had a real live banana for a blade. It was preserved by his dad, who was a taxidermist. The rest played with firewood from the warming house. Rich kids up the way like Thaddeus P. Cockburn could afford Northlands, but we always had the edge because of our toughness and the fact that any one of our sticks could kill a human being when you hooked them.

More true stories after the jump...

You see, part of the reason Bobby Hull could hit it 150 mph was because he was swinging a 50 lb. stick carved from 3,600 year old Bora Boran driftwood. Goalies took to wearing chain-mail; kids do it all the time nowadays, but the first person to get nipple piercings was Johnny Bower after a Blackhawks powerplay.

The aluminum stick was genius because it wasn't any lighter than wooden sticks but were tested to withstand 250,000 shots or 325,000 hacks at human flesh. They might have stuck around longer if the mortality rates hadn't gone up so much...

Now, we have these little feather-light things (remember when Sherwood had those "feather-lites" that were really just normal Sherwoods?) made from space-age materials that cost $150 a pop. In my day, you could buy a Third World country for $150 dollars. And the fact that these sticks break 30 times a game gives you an idea of the quality of our once-proud NASA program. To think, they have the gall to cut down an institution that brought me Tang and ear thermometers.

The result? A bunch of pansies swinging around weightless twigs, which incidentally allows weightless twigs to become NHL players. They struggle to shoot 115 mph when I used to do it warming-up in juniors. Enjoy your Vector Super-X 3500 Lite Graphite Blazer Laser, I'm sticking with my silver Gretzky.

Monday: What Does it Take to Be a Goon?

Grandpa's Analysis: The attempts to biggify those heart-and-soul players is counter-productive. Surely teams have seen my heart metric and realized the smaller the berries, the sweeter the juice. (Editor's note: he made that phrase up.)

Tuesday: The League of Extraordinary Statisticians: The Conferences

GA: Solution? Get rid of the Western Conference. It's like 90% teams that don't belong in the league anyway. Swap Calgary and Edmonton for Tampa Bay and Florida and we're good to go.

GA: Great, another stat geek to deal with. At least I agree that elite players should be penalized, though I prefer the explanation to be that it's because they're a bunch of pansies.

GA: Tell you what, they have some medications that make sure a part of me never gets old.

Wednesday: What's up with Sharks Fans?

GA: Oh, oh, I know the answer to this one! The answer is there shouldn't be a team in San Jose.

Thursday: Who are you going to bet on in the East?

GA: What's with all the questions, Gabe? I haven't been interrogated like this since the Commies caught me trying to sell freedom fries over the top of the Berlin Wall in '82.

GA: He's right, you can't just have momentum all the time, because you can't fight all the time. It works better in small doses, like morphine and Moon Pies.

So ponder the choices you make in hockey sticks, people. Do you want to wussify this sport any more than it already is? Aren't Europeans and visors enough?