Share All sharing options for: Odds and Ends: Crowdsourcing Passing and Zone Diagrams

Don't worry, it's a short post for today. I've been working like hell on the continued analysis of the Kings-Blues game, with pass by pass tracking, power play formations, puck tracking(this one I'm real excited about), and more. With that in mind, I have two questions. 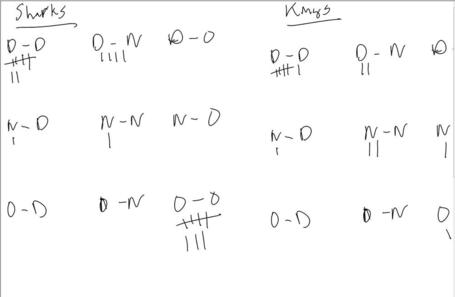 Sorry for the cutoff, sometimes Windows Journal earns its reputation. As you can see, you're very rarely going to have to keep track of Neutral to D, or O-D or O-N or D-O, so it's not too much of a hassle. I managed to keep up with the play without having to rewind it. I suggest that we do games on this Sunday, April 3rd. I will be charting the Flyers-Rangers like this, so if anyone wants to be a team player and pick up another game(even if it's just part of it!), I would be very grateful for the data. The point of this is to see where we can get with baby-baby-baby steps. Just having raw pass totals for teams would do us loads of good.
So, if you are interested, hit me up in the comments and let's see if we can take one small step for hockey-analysis-kind. And by the way, here is the blank chart: