The Significance of Tagging a Shot as a 'Scoring Chance'

Share All sharing options for: The Significance of Tagging a Shot as a 'Scoring Chance'

We have recorded scoring chances for roughly 300 games this season, so I was wondering what all of that tagging told us about game play. First, where scoring chances take place: 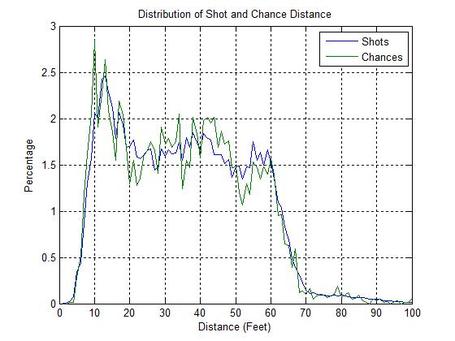 This is a bit of a surprise - here's the qualitative description of a scoring chance:

"For those who'd like a definition: a scoring chance is defined as a clear play directed toward the opposing net from a dangerous scoring area - loosely defined as the top of the circle in and inside the faceoff dots, though sometimes slightly more generous than that depending on the amount of immediately-preceding puck movement or screens in front of the net."

You'd think that there would be relatively fewer chances farther from the net, but that doesn't appear to be the case. I do notice that the recorded chance time doesn't always match up to an exact time of a recorded shot on the scoresheet, so it's possible that the video review is tracking a different event. This clearly requires a bit more review.

What's also interesting the shooting percentage on a scoring chance vs a shot in general: 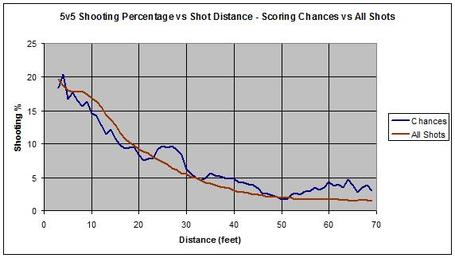 It doesn't look like there's much going on there, but it's a lot more obvious when you plot the ratio of the two shooting percentages: 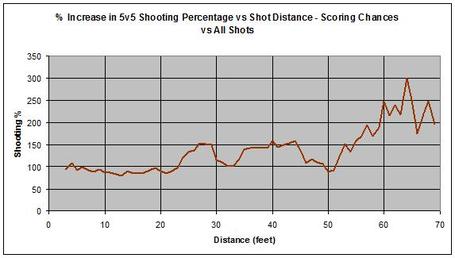 This clearly corresponds to the definition of a chance - most shots near the net are chances, so we don't expect much of a difference in shooting percentage. But when you get up near the blue line, only shots with a lot of puck movement and screens are recorded as chances. So we see a massive increase in shooting percentage beyond 50 feet, which makes a screened shot from the point as dangerous as the average shot taken in the slot from the top of the circles.

Overall, it seems strange that these two things can co-exist - chances have the same distribution as regular shots, but when they're far away from the net, they're much more likely to go in. Clearly there's room for more exploration of the data here.