Having spent quite a bit of time putting together Balanced Zone Shift and looking at the different types of players that have done well by the metric, there is at least one more thing that I want to check out.  Since most player metrics, like players' careers, have a certain "peak" age, I want to try splitting up the BZS data into age groups and see where we end up.  In the process, I also want to include an additional graph of player age versus zone start percentage, since I think that would be another interesting thing to look at.

What I found, first of all, was that there just simply aren't enough performances below age 19 and above age 37 from 2007-08 to 2010-11 to make looking beyond those ages worthwhile.  So, moving forward with those caps on our data, lets take it to the pictures...

First, the zone start percentage versus age graph.  The data covers all performances over those four years of 50+ games played in the full seasons and 30+ games for this year (click to super size): 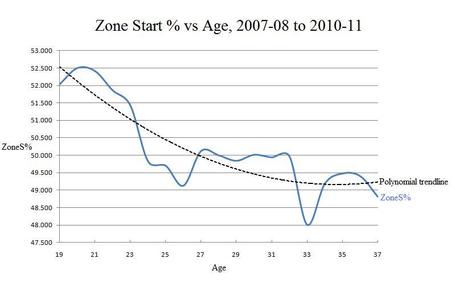 Probably not so surprisingly, younger players did not typically get tougher defensive assignments these last four years.  It changes quite quickly by age 23, where players who had already been in the league a couple of years start to gain the coaches' trust and minor-league call-ups have begun to receive tougher situations in the lower leagues.  With this in mind, the relation of BZS to Age is a bit more choppy: 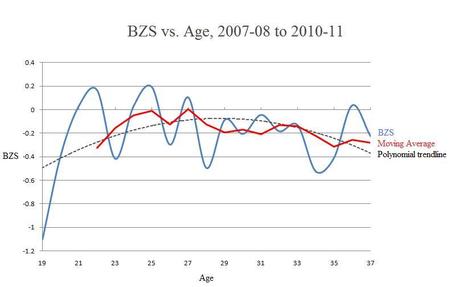 As you can see, I added a moving average line to the polynomial, just to give another look to the curve.  Young players adjusting to the league might get favorable playing time (per the first graph), but they still take some time to establish their talent at the NHL-level.  By any of the trendlines, if a player over the last four years didn't show considerable promise by their age-24 season, the odds were pretty slim that they would improve substantially beyond their current (to the time of analysis) performance.  By the age-29 season, players began a slow decline, though their performance wouldn't be overtly catastrophic even at the ripe-old age 37.  In case you're interested, the raw data for the graphs:

A couple final thoughts on BZS (for now):