Share All sharing options for: 12/17/10 Det-Chi Distance Traveled by the Puck

The details are a little hazy, but the puck traveled approximately four miles during the third period of this game.  Surprisingly, it appears to have been carried as far as it was passed:

And who did the bulk of the puck-carrying?  First, Chicago:

Soupy's your guy yet again.  And for Detroit?

Same guys at the top - but Darren Helm?  According to our scorer, he skated the puck from his own end to Chicago's end four times, breaking several checks and skating past a number of Hawks players.  It would definitely be worth going back to the videotape on that one!  Let's look at where the puck was carried: 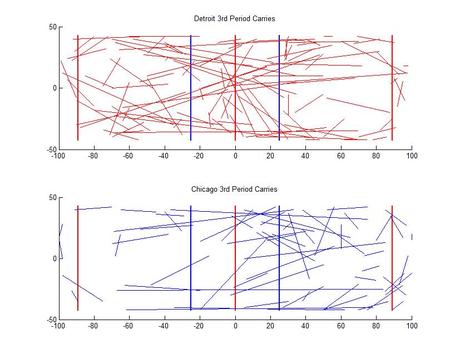 Again, you can see that Detroit did most of the puck carrying (61% to 39%).  Not surprisingly (but interesting to see), neither team carried the puck into their opponent's slot.