We've seen in the past that over a large number of games, Fenwick and Scoring Chances ultimately converge to the same ratios; the same is true for those two stats and Possession.  Where does Passing come in? 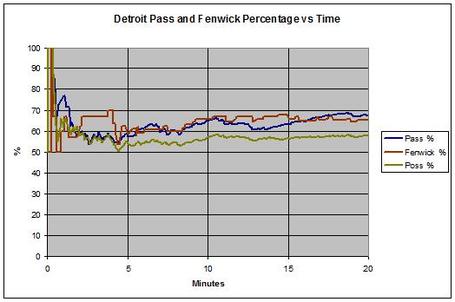 The chart shows the percentage of all passes made by Detroit, the percentage of shots taken by Detroit and the percentage of time that they had the puck.  There's a bit of a gap between the three measures - Detroit seems to get more efficient in generating shots as the period progresses.  We see long-term convergence between possession and Fenwick, but if we only look at what happens when the game isn't tied in the third period, we can get different results.