Back in December, I put out feelers for people to score the 12/17 Detroit-Chicago game.  I even offered to pay.  I ended up with data for the third period of the game that's an absolute treasure trove.  (In case you ever want to do it yourself, a Hawks fan - known only as E. Gao - spent 18 hours recording the data.)

I have weeks of analysis that will come out of this, so I'm going to start with something basic: passing.  First, let's look at some top-level passing stats:

Detroit was trailing 3-1 going into the 3rd, so we knew they were going to control the puck (and the passing) most of the time.  Overall, they generated 2/3 of the total passes in the period.  You can also see that Detroit was much more aggressive than Chicago - they made 47 passes in the offensive zone, compared to 18 for Chicago; they passed from inside their own blue line to outside of it 17 times to just 5 for Chicago; and they completed 30/31 d-zone passes compared to 24/28 for Chicago.

Regardless of the length of the pass, the passing proportions don't really deviate from the 2/3 ratio:

Detroit simply tried more of everything.  A graphical representation is probably helpful: 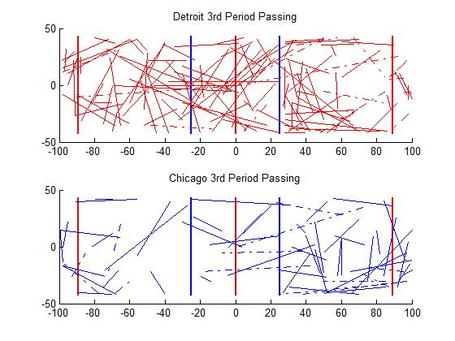 Completed passes are represented by solid lines, while incomplete passes are dashed.  Some breakout passes that must have gone along the boards are shown as direct lines from point-to-point, which might look a little funny.

At any rate, there's a lot to come - individual passing; time of possession by zone; analysis of what happened when Detroit pulled Jimmy Howard for 1:22.  If you have any suggestions, please fill up the comment box!