Share All sharing options for: Discipline key for IceCaps 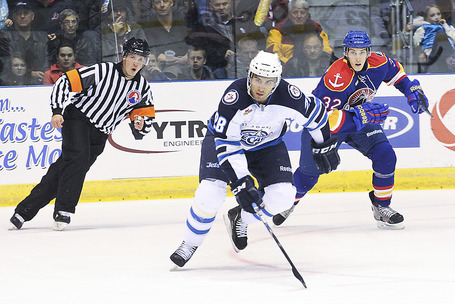 After returning home from another successful (albeit quick) road trip, the St. John's IceCaps have once again climbed to the top of the AHL's Eastern Conference. Yet to suffer a regulation loss on the road, the team kept things intact by defeating the Hamilton Bulldogs and Toronto Marlies, respectively, over the weekend.

Boasting a remarkable record of 14-4-4 so far this season, not much has gone wrong for the IceCaps, despite losing a ridiculous amount of players to callups and injury (Riley Holzapfel being a recent victim of the latter). But there are always areas for improvement, and the IceCaps' play on home ice could definitely be better, so let's take a look.

One thing I admire when watching the IceCaps is their discipline. They rarely take foolish penalties, and manage to keep things under wraps when you believe the game is going to get out of hand. I've watched a few games on the verge of boiling over, but simply didn't.

This becomes clearer when you take a look at the fact that the IceCaps have only totalled 265 penalty minutes on the season so far. Some other teams are already above five hundred.

The IceCaps average 12.0 penalty minutes per game, dead last in the AHL (or first, I guess, depending on how you look at it). And thankfully that's the case, because their penalty killing is dreadful at home, where they've been operating at only 67.1%. They don't get penalized often, but when they do, on home ice at least, they pay for it.

I'm not sure why the discrepancy here - the Caps have not really faced tougher competition on the road. It's likely that they're about on the level in terms of opponent difficulty on the road and at home since they play a lot of the same teams. They have confidence on the road it seems, and it shows in their 8-0-2 record away from Mile One. For a new team with a lot of fresh faces, the time on the road is likely a good time for these guys to gel.

One thing is certain though, the IceCaps have found plenty of success this season simply doing what they're doing, and that includes staying away from the penalty box. If they can bring that penalty kill to a respectable level on home ice, their chances of holding on to tops in the East can obviously only get better.

With St. John's being without pro hockey for six years, this early success is a lot to handle. The team has sold out every game at Mile One Centre, and will keep that up as they continue to win. I'd expect things to even out a little in terms of special teams performance, but what's almost scary is that this team continues to pile up wins without many key players, including Jaffray, Kulda, Klingberg on callups, and now Holzapfel to injury.

They could slow down, but they're showing no signs of it right now.

The IceCaps' next game goes tonight at Mile One Centre. Check out The Ice Flow for a game preview and some links.