IceCaps settle in to battle atop the AHL

Share All sharing options for: IceCaps settle in to battle atop the AHL 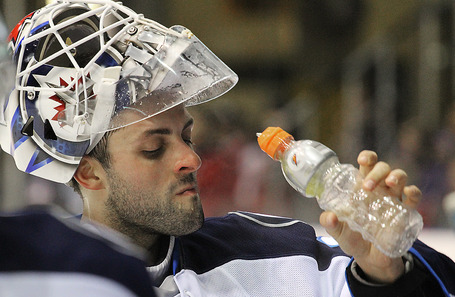 The IceCaps return to the ice tonight after a ten day Christmas break, when they face the Hamilton Bulldogs for the fourth time this season. It’s the start of another mini road trip which will end with two games against the Marlies in Toronto over the weekend.

St. John’s enters the game tonight with a 2-1 record against the Bulldogs this season, outscoring them 10-6 over three games.

After dropping three straight games early this month, the IceCaps bounced back with a couple of wins, but have found their place in the standings slip a little. They’ve been ousted as the top team in the division, with Manchester taking over, but still hold one of the best win percentages in the league at .672 and only seven regulation losses (Houston being the only team with six).

The team continues to float around the bottom of the league in terms of penalty minutes, now sitting at 27th with 13.4 per game. It’s a part of their game that has helped bring success, but weighs on fans who believe the team should be tougher. While it’s a difficult thing to balance, until results start going down the drain, it seems foolish to argue with their disciplined approach.

Tonight’s game will mark the start of the team entering the crucial part of the schedule where teams should really start to separate themselves from weak clubs. St. John’s can prove that they belong at the top of the division, or start to fall to the middle of the pack where they’ll be just another team. Grabbing two of three on this quick road trip to Ontario is important in keeping pace with the big clubs like Manchester and Hershey, among the top of the conference.

With Machacek and Rosa being the two stand-out forwards for the Caps this year (at least in terms of guys who’ve been with the club throughout), it will be interesting to see how players like King, Cormier, and Gagnon fair in the new year. Each has shown the ability to provide scoring, and there’s no doubt that depth has been the topic of conversation surrounding the team for much of the year, particularly when they continued to win despite an insane amount of callups heading to Winnipeg.

Goaltending has been somewhat of a sore spot for the IceCaps lately. They currently only boast one goaltender, Mannino, with a save % above .900 (he’s at .907, not exactly great). Pasquale and Aebischer have struggled, posting .891 and .896 respectively. Aebie has nabbed the most starts this season with eleven. Not to worry, Mannino will be the guy going forward.

Personally, I think there isn’t much for fans to fret about regarding this club. They’ve managed to cover up any roster holes so far, and have made the best of some not-so-ideal situations. And after all that, they’re still only two points back for the division lead with three games in hand.

It’s actually not too far-fetched to believe these guys are ready to go on a disgustingly good run into the new year and on. With the early season’s roster starting to re-take shape and a good reset over Christmas, I see no real reason why this team, deep with talent, should slow down.

Email ryanfancey@gmail.com and follow here, or the blog here

Game goes at 7:30 ET tonight, with Brian Rogers providing play-by-play over the radio at thisisnewfoundlandlabrador.ca. Tune in.