Share All sharing options for: Fenwick Timeline for Jets vs. Penguins Game, Article-Style

Per request, I'm making this into an article. Basically, I was initially looking for a shot breakdown period-by-period for last night's game, but even that wasn't showing me numbers that made sense, so I decided to take the NHL.com play-by-play for the game and chart the shots and missed shots for both teams (aka Fenwick) to see if I was right in saying we played a pretty solid game until the 3rd period.

I included shots at all strengths, and all score situations, to get a better sense of the game as a whole. You start to slip or gain advantage in a game because of those nuances, so I felt this would be a pretty good indicator of the highs and lows of the singular game. If we want to start talking about overall talent of the team, I think that's when you should start worrying about score effects and even-strength data. In article form, I can just give you the full chart and tell you when the powerplays and penalty kills were.

Chart and info after the jump. 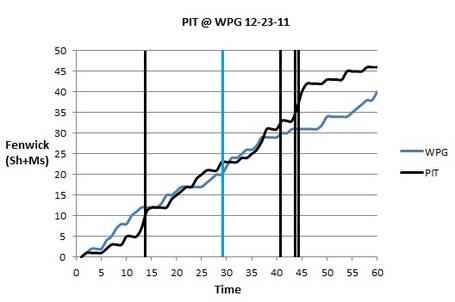 As you can see, I have the full Fenwick score on the y, and the time (in minutes) on the x. The vertical lines indicate goals, and the 20 and 40 minute marks obviously indicate the period breaks. This time around I did the data minute-by-minute, but next time I'll go second-by-second. Important additional events (all from WPG perspective) for context:

As you can see, the 1st period flurries really show up, then the Pens pull even and it was pretty back-and-forth until that 3rd period, when things really went to hell. Anyway, I just wanted to try out something to depict the progression of the game, and it turned out pretty nifty, so here it is. I should be able to do this fairly regularly...it's nice to see the game I was seeing show up in these data, and I think it will be interesting to see things like score effects and 5v3's or 3v5's charted out, too. Enjoy.