Allow me to take a back-door entry into the shot quality prize contest:

Point #1: There is a skill for having more offensive zone faceoffs as a team.

This probably requires a split-half reliability or something similar for rigorous proof, but I doubt many of you need to be convinced of this -- it's been shown that Corsi measures a talent closely related to zone time, and it's hard to believe zone time wouldn't be closely linked to offensive zone faceoffs. So I'll offer a simplistic approach as half-hearted proof of something I think most of us already believe:

Point #2: Teams that get more offensive zone faceoffs also tend to get a larger percentage of their shots within 20 seconds of the faceoff.

This is the more tenuous part of my argument. It's obvious that teams that have more OZ faceoffs will have more shots right after the faceoff, but it's not necessarily the case that those shots will be a larger percentage of their total shots, in a way that could influence their shooting percentage. So let's break out a scatterplot here: 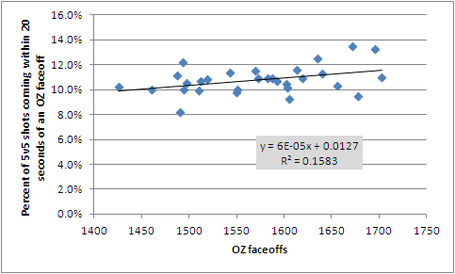 Point #3: Shots taken in the first 20 seconds after an offensive zone faceoff are of a lower quality than the average shot.

Here's the interesting part. Shots taken at 5-on-5 within 20 seconds of an OZ faceoff last year were saved at a 0.928 clip, whereas shots taken at 5-on-5 in all other times were saved at a 0.917 clip. This difference is easily significant. So much so that I thought I had to have it wrong, which is why I pulled the '09-10 data in the first place, but I saw the same effect there (though a bit smaller at .925 vs .918).

So is there a team shot quality effect?

Side note #1:The 20 second threshold chosen here for "immediately after faceoff" is somewhat arbitrary. Moving the cutoff later strengthens the effect claimed in point #2 (more time sampled leads to stronger correlation) but weakens the effect in point #3 (sampling time farther from the faceoff weakens the post-faceoff shot quality effect). For example, if the cutoff were set at 30 seconds, the correlation in the second plot would rise to 0.49 (R^2 of 0.24), but the shooting percentage differential supporting the third point would shrink to 7.4% vs 8.3%.

Side note #2: As an interesting aside: I started this work expecting to find the opposite after discovering that a shot in a Flyers game this year was more likely to be recorded as a scoring chance if it came after a OZ faceoff than if it came after a zone entry (41% to 33%). If faceoffs lead to a higher percentage of shots being scoring chances but a lower percentage of shots being goals, then either the non-scoring-chance shots are really terrible ones or the scoring chances on set plays aren't as dangerous. Someone with a more thorough data set than mine might want to look at scoring chance save percentage after faceoffs versus overall.