The NHL's Most Interesting Name: The 1980s Part I

Share All sharing options for: The NHL's Most Interesting Name: The 1980s Part I 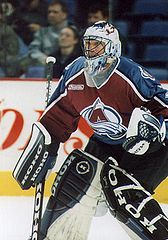 by Rick Dikeman via upload.wikimedia.org

The 1980s were a weird time, and anybody who went through it likely has a stack of pictures they hope nobody ever sees. While these unfortunate individuals expressed the odd 80s by wearing Guess jeans and sporting odd buzzcuts and combovers, the NHL decided it was prime time to have an asplosion of offence. Hell, even Hakan Loob and John Ogrodnick eclipsed 50 goals and 100 points in a season, which was about as probable as Jonathan Cheechoo's 56-goal season in 2005-06.

Thankfully, such an unusual era lends to our contest...

Once again, our purpose:

Hit the polls, yo.