Impact of Firing a Coach on Fenwick %

Share All sharing options for: Impact of Firing a Coach on Fenwick %

Just a random thought here - does firing the coach have any impact on a team's shot differential?  It seems that it does - since the lockout, in the game (Game 0 on the chart) where a coach gets fired, his team posts a 46% Fenwick %.  In the new coach's first game, the team's Fenwick % is almost 55%.  Long-term, there seems to be a 1-point boost (from 48.4% to 49.4%) once a team replaces its coach: 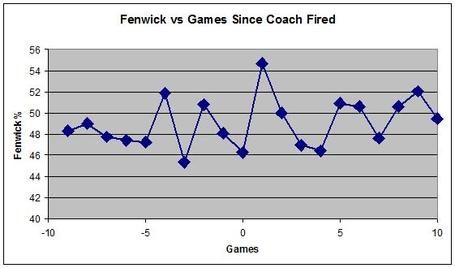 On average, a mid-season coaching change has been worth roughly half a win.  If a team is bad enough to fire their coach, half a win is a rounding error for their season.