Survivor Effects: If a Player plays 82 Games this Year, how many will he play next year?

Share All sharing options for: Survivor Effects: If a Player plays 82 Games this Year, how many will he play next year?

A player who plays 82 games in a single season is a very durable one, but the risk of significant injuries is so high in the NHL that we expect him to play a lot fewer games, on average, in the following season: 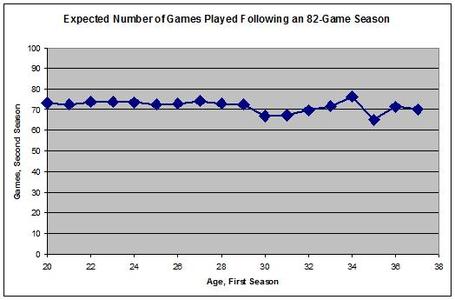 Of course, averages are deceptive here compared to medians.  If we look at the distribution of games missed among players 20-29, we can see that most players will play more than 73 games: 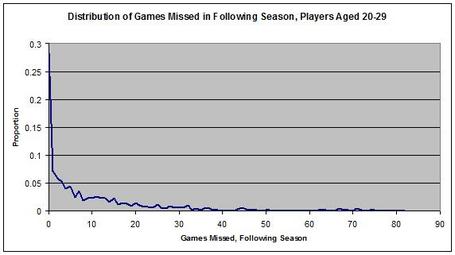 In fact, the 50th percentile is 78 games played, and 2/3 of players will play 73 games or more.  It's the 5% who missed half the season or more who drag everyone else down.  Survivorship in the NHL is actually slightly worse than what I've shown here - some players play 82 games and follow it up with zero games the following season, either because they have an incredibly serious injury (or even die) or go play in a different league.  So I've left out all of the zeros in this analysis.

Bottom line: if a player plays 82 games in a season and he's under 30, odds are he'll come very close to playing every game the following season.