Last Chapter of Who's a Better Shooter? Kovalchuk or Tanguay?

Share All sharing options for: Last Chapter of Who's a Better Shooter? Kovalchuk or Tanguay?

Ilya Kovalchuk has had precisely once competitor in the shooting department: Alex Tanguay.  In fact, at even-strength over the last five seasons, we're more likely to observed Tanguay scoring on a given shot than Kovalchuk: 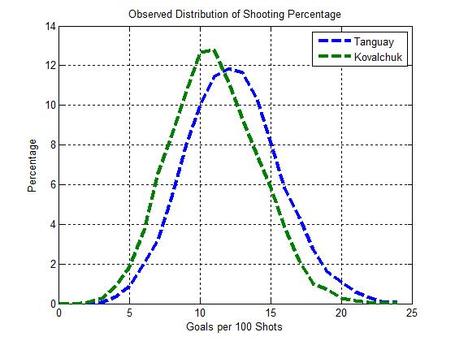 Of course, Tanguay shoots from a little closer to the net, on average, than Kovalchuk does.  If we adjust for that, we find that Tanguay and Kovalchuk have the same distribution of observed shooting talent: 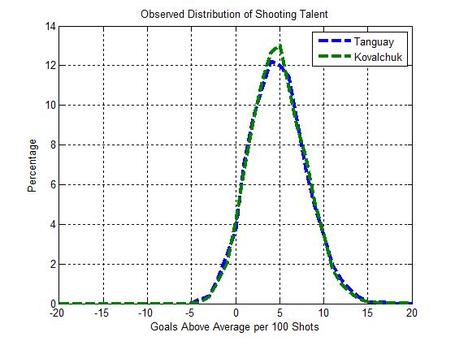 So who's the better shooter?  There's no question: Kovalchuk.  We can see this if we start them both with the same talent distribution and update it with the last five seasons of data: 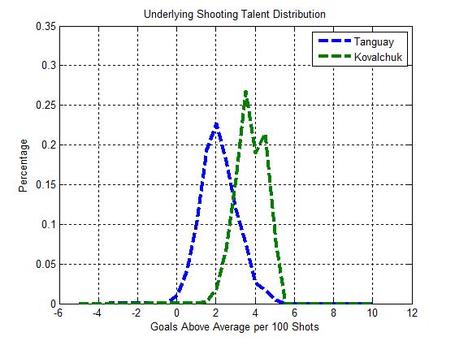 In fact, we're confident that Kovalchuk is a better shooter than Tanguay was.  Why is that?  Kovalchuk has taken nearly three times as many shots as Tanguay over the last five seasons.  We simply know a lot more about him than we do about Tanguay - regardless of what initial (reasonable) distribution we start out with, Kovalchuk will come out better.  We could approach this from another direction and get the same solution by regressing Tanguay's performance more heavily to the mean than Kovalchuk's, but updating the initial estimate with new data seems an easier path to that result.