Offensive Zone Faceoffs and Eliminating Icing on the PP

Share All sharing options for: Offensive Zone Faceoffs and Eliminating Icing on the PP

Some of you may have seen my generic analysis from last year of shots for and against following a faceoff. Derek Zona asked me to run the same for power-plays. Here are the results - first, cumulative shot totals per faceoff: 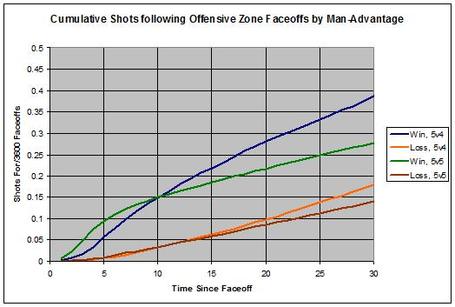 Two things to note: 1) the slope of the line is higher for 5v4, which we'd naturally assume - it's just that much easier to get a shot on the PP; and 2) faceoffs at 5v5 are much more likely to result in a quick shot. That's not surprising either - if you win a PP faceoff, you can control the puck and work it around looking for a better chance (plus with one fewer opponent, you're more likely to win control cleanly.) But you wouldn't work the puck around at even-strength. Here are the instantaneous shot counts: 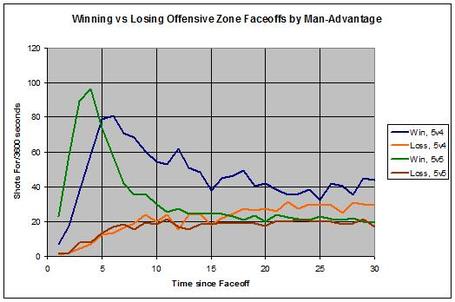 If you win an offensive zone faceoff at 5v5, whatever advantage you gained is mostly gone after 10 seconds, and it's completely gone after 18 or so. On the other hand, at 5v4, your opportunity rates never converge. Odds are, if the defensive team wins a faceoff, they'll dump it down the ice. You'll lose time going back to get the puck and they'll get a change, and those fresh legs will ultimately reduce your ability to get scoring opportunities.

Now what happens if, as the NHL's rulemakers have suggested, you get called for icing when you're on the PK? If the defensive team ices the puck, they've probably reduced their expected future shots against by about 0.2 shots (you can read that off the first chart - say at 25 seconds). If they get called for icing, the play is short-circuited after about 5 or 6 seconds, and they've only reduced their expected shots against by 0.1 shots. However, they're up for another defensive zone faceoff, which - given a 53.8% win% by the team with the man-advantage - leads to an average deficit of 0.1 shots for them. So by calling icing, we've just cost the team that's a man down 0.2 shots per icing.

We don't have any data on how often the defending team ices the puck on the PK, but let's say they still choose to do it twice per penalty kill. Then getting called for it costs them 0.4 shots per PP opportunity. Overall, we're looking at a 20% increase in shots (and goals) by the team with the man-advantage, or roughly six goals per team per season. (That's literally a 2% increase in offense.) Teams might ice the puck more now, but obviously if there was a cost associated with it, they'd hang on to the puck a little longer or try to put the puck on net instead of just dumping it down the boards. Whatever the outcome, it won't significantly boost league-wide offense.